An account of the days spent in Toronto by Monsignor Ocáriz during his pastoral visit to Canada.

The Prelate’s visit to Toronto came to a climactic close with a beautiful celebration of the Assumption of Our Lady. Women from all across the Greater Toronto Area and southwestern Ontario streamed into Kintore's chapel, filling it to capacity. Teresa played the organ and the choir led the singing at the Prelate’s last Mass in the city.

After Mass, everyone spontaneously gathered around the Prelate, taking advantage of their last opportunity to tell him a story or to shake his hand. Queenie asked him to bless a photo of her family. Grace took one last group selfie with the Prelate at the entrance of Kintore, before escorting him to his car. There were so many people waving goodbye to him on the street, thanking him for his visit, and taking photos that one man must have thought the Prelate was a TIFF celebrity and he stopped and started waving too.

On his second full day in Toronto, the Prelate of Opus Dei had a meeting at Wilson Heights with a group of men who are members of the Prelature. 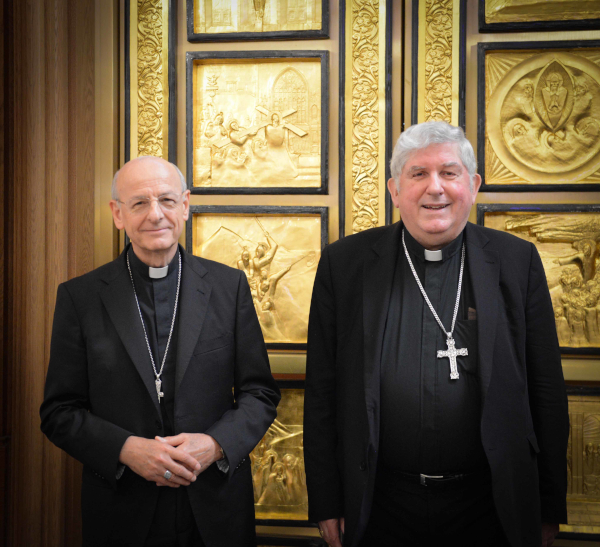 After this get together, the Prelate went downtown to meet the Archbishop of Toronto, his eminence Cardinal Archbishop Thomas Collins. The Father joined Mons. Dolan and the Archbishop for a tour of Toronto’s recently restored St. Michael’s Cathedral, including views of the crypt in addition to the main sanctuary of the Church.

After having the chance to meet with many families and friends, the Father had a get-together at the Fairview Library Theatre with women of Opus Dei, cooperators, and friends. Eliza and Kathleen assembled an impromptu choir for the evening, with Theresa playing the piano. The Father started the get-together by complimenting their fine singing voices. The Father said that the women who were there gave him hope and that our hope has to be based on faith, not our own strength. With the force of God's love, we will be able to bring many other people closer to God and spread out across this enormous country of ours. 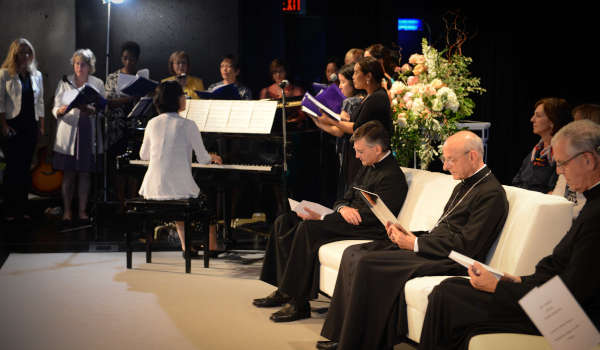 Rhonda, who works at Hawthorn School for Girls, asked how to bring people closer to God. The Father encouraged her to be a real friend to her friends. In this way, they will often become interested in God "because they are interested in you."

Right before the get-together, everyone sang to Diane because it was her birthday. The Father also wished her “Happy Birthday” and responded to her question about how to prepare for her upcoming wedding. He encouraged her to prepare herself and her joyful home with a lot of prayer. Many people think that love is primarily a question of being with someone who makes you feel happy. While this is important, he pointed out that true love is above all to seek what is good for the other person. This generous love is the necessary ingredient in a successful marriage, and it will sustain a couple through the ordinary ups and downs of life. 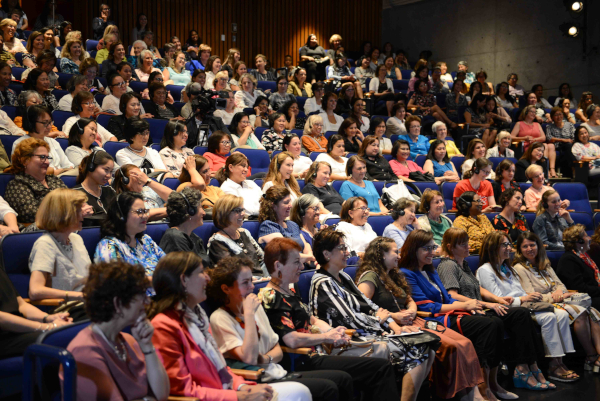 A young computer programmer named Tereza told the Father that we were all very excited this summer because of two major victories. First in June, the Toronto Raptors became the first Canadian team ever to win the NBA Championship. Then last week, 19-year-old Bianca Andreescu from Mississauga became the first Canadian in 50 years to win the Rogers Cup in tennis. The Father replied that St. Josemaria had said we can learn from such athletes to have a sporting spirit in the spiritual life. This means that we need to set goals for ourselves and above all, we can’t let ourselves be held back by failure. 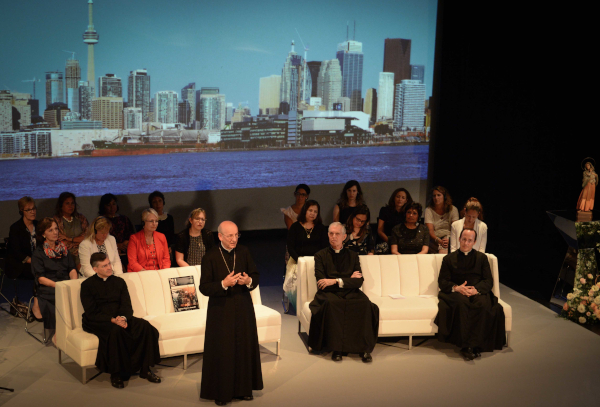 The Prelate spoke about the true meaning of freedom. To be free, he said, is to do something because you want to, not because you have to. Freedom is not primarily a choice. For example, sometimes we make choices because we feel forced by circumstances or by other people, but these are not free choices. The only way to act with true freedom is to act out of love. Love enables us to want even what we do not like. Freedom is therefore primarily a question of love, and only love brings happiness in every situation of life.

On Tuesday, August 13, Mons. Ocáriz spent his first full day in Toronto. He visited Ernescliff College, a university residence located on the campus of the University of Toronto, and held a get-together with students and young professionals.

After being welcomed, the Prelate spoke about the importance of Christian formation, saying that it does not mean being informed about abstract concepts, ideas and values; rather, it is most fundamentally our being formed according to the likeness of Jesus Christ, our being identified with Jesus Christ. He also addressed the topic of facing difficulties in our Christian vocation, explaining that we should never view the challenges as negative. Quite the contrary: the greater the challenges, the more grace we receive from God to help us, so we can embrace those challenges. 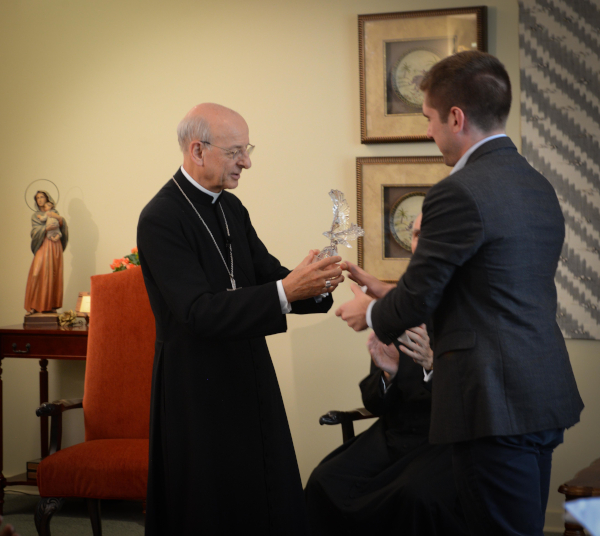 Before the first question, Peter, an engineer, presented the Prelate with a crystal sea eagle (or erne), the principal symbol on Ernescliff College’s crest, to commemorate Ernescliff’s 25th anniversary. Daniel, a high school student, presented the Father with a Toronto Raptors jersey emblazoned with “El Padre”, and a Raptors championship cap. He then asked how young people like him can contribute to the mission of Opus Dei, given that it is just beginning in Canada. Several other questions were part of the conversation at this get-together, including helping those in need, balancing a demanding work schedule while leading a solid Chirstian life, making commitments, finding one’s vocation, helping others get closer to the faith, and even about the Prelate’s own vocation to Opus Dei.

In the morning, the Prelate visited Kintore College, a beautiful university residence educational centre which opened on the campus of the University of Toronto in 2012. Kintore hosts a variety of events for women of all ages. Amid jokes, songs, personal stories, and magic tricks, the Father stressed the benefits of being cheerful at all times. Joy enables us to have an open heart, and to be better equipped to deal with the ups and downs of everyday life. 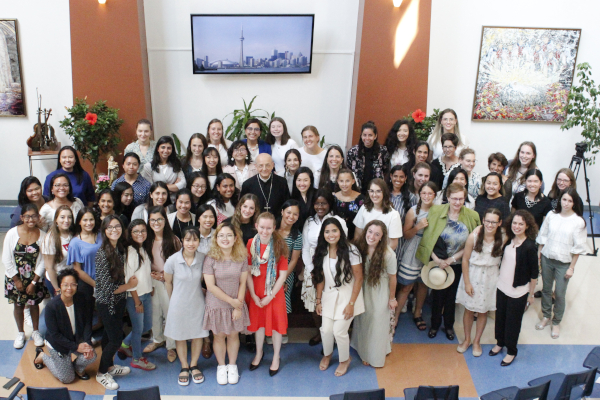 After lunch, the Father visited Hawthorn School, the only independent, Catholic-inspired, all-girls school in Toronto. Founded 30 years ago by a group of parents and educators, Hawthorn now provides integral education in daycare and summer camps as well as excellence in elementary and secondary education. The Prelate met with the Boards of Directors and staff of both PEV and Hawthorn and encouraged them in their service to women of all ages.

Mons. Ocáriz also met with high school and university students later in the afternoon. Karina told him how she had come closer to God through working in the Kintore College Hospitality Services as a student and how much it had helped her to be able to ask all of her questions in her classes on the Catholic faith. Now that she has become a Catholic, the Father encouraged her to show others the beauty of the faith through her ever-increasing joy.

Rebecca spoke about attending the Beatification of Guadalupe Ortiz de Landazuri this past May in Madrid and how she had appreciated hearing from others about their journey towards God. The Prelate emphasized how God has a plan for each one of us and that we should trust that His plan will make us happy.

Irene asked the Prelate to pray for Anchor and other summer camps which are taking place in different parts of Ontario. The Prelate encouraged her to help her friends discover how to use their time well and to speak to them about the dignity of each person.

In the evening, a group of about 200 persons received Mons. Ocáriz at the Fairview Library Theatre in Toronto. Patrick, a father of three boys, brought up the suffering afflicting his immediate family and asked about how to love the crosses one is asked to carry. Efraim, who recently left his job as a banker to work in the trades, asked the Prelate how he could convince his friends about the equal dignity of all professions, even those that are less prestigious. The Prelate spoke about the innate value of human work. Rex, a teacher and father of seven children, asked how he could help his immediate family understand his commitment to the means of formation in the Work. The Father suggested that Rex show his family that he is happy to attend the means of formation. Seeing him happy, they will see the good it brings him, and that is what they will want for him. 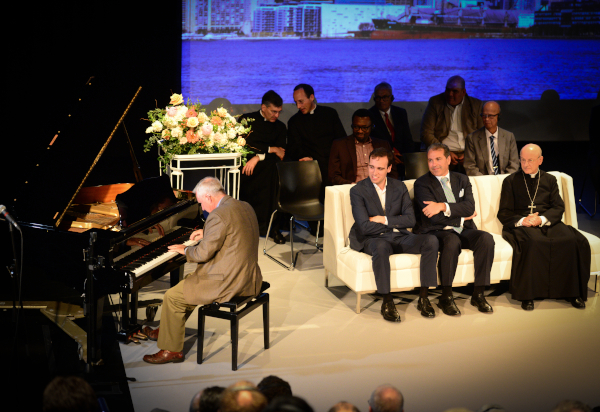 Before the end of the get-together, Mike performed a piano piece for the Prelate, who then imparted his blessing on all those present. Afterwards, some families greeted Mons. Ocáriz personally.

The Prelate of Opus Dei arrived from Vancouver on Monday, August 12, touching down at Toronto Pearson International Airport at around 6:00 pm local time. Some families from the Toronto area greeted him upon his arrival at the airport. Daniel, an entrepreneur, was waiting with his wife Magda and their six children. After meeting the Father with a “Welcome to Toronto” banner which depicted the CN Tower, Canada’s tallest building, they gave the Father a Canadian coin with two footprints on it, a reminder of the footprints in the snow that St. Josemaria saw as a teenager. Afterwards, the whole family took a picture with the Prelate. 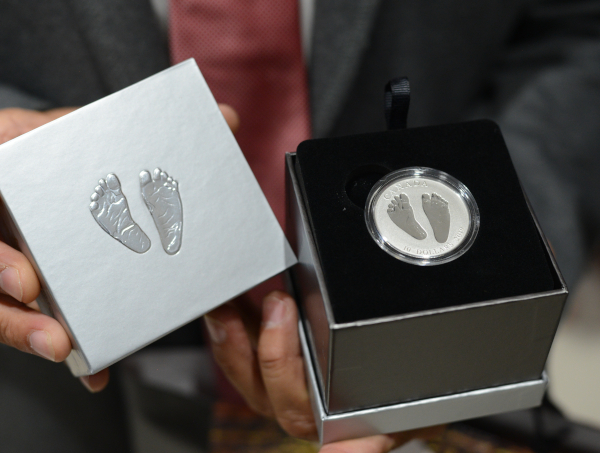 Juan Diego, father of four, also came with his wife Carey and his family to welcome the Father. Mons. Ocáriz will be visiting Toronto from the 12th to the 15th of August as part of his pastoral trip to Canada. He will be meeting many members, cooperators and friends of Opus Dei from throughout Toronto and Southwestern Ontario over the next few days.

After arriving, the Prelate made his way to Wilson Heights, a centre of Opus Dei in Toronto. Tuesday and Wednesday, August 13 and 14, he will have gatherings with people from the greater Toronto area and greet families. On Wednesday, he will meet with Cardinal Collins.