9 August: Feast of Saint Teresa Benedicta of the Cross

Father Peter Damian Grint offers some reflections on the feast of Saint Teresa Benedicta of the Cross, which is celebrated on 9 August. 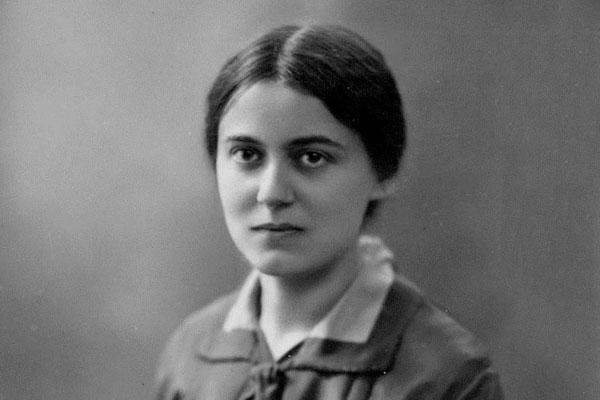 As Christians we are called to develop our talents in God’s service.

“The true Christian,” wrote Edith Stein, “is not obliged to renounce the things of this world or to lessen his natural abilities. On the contrary, inasmuch as he incorporates them into his normal life in a disciplined manner, he develops and perfects them; he thereby ennobles the natural life itself, supplying efficacious values to it, not only of the spiritual and eternal world but also of the material and earthly world.”[1] Edith Stein was herself an outstanding example of this development of one’s talents for God’s glory: after becoming a Catholic she placed all her work – in her case, academic research and teaching – at the Lord’s service.

Edith Stein was born in 1891 in the German city of Breslau (now Wrocław in Poland), the youngest of eleven children of a Jewish family. A gifted intellectual, she studied under one of Europe’s leading philosophers, Edmund Husserl, working as his assistant before gaining a brilliant doctorate.

Many of Edith’s colleagues were Christians, and she was greatly moved by the faith of the widow of a colleague, Adolf Reinach, who was killed in World War I. Then one day, when she was thirty years old, she picked up the autobiography of Saint Teresa of Avila from a friend’s bookshelf and could not put it down. “This is the truth!” she told herself upon completing the book. She was baptized a Catholic the following year.

As a woman, an academic career was closed to Edith; instead she took a lectureship at a teacher training college in Speyer. She “regarded education as a form of apostolate,” her biographer tells us, “and generously devoted herself to the needs of her students.”[2] One of her pupils recalls: “She rapidly won her students’ hearts, serving us all as a shining example with an influence that has lasted down to the present day.”[3] “We enjoyed attending her lectures and eagerly assimilated the encouraging suggestions she offered about leading a truly authentic Catholic life… All of us considered her a model, both of humanity at its purest and noblest and of a life lived out of Christian conviction.”[4]

Our vocation in the world should make this attitude second nature to us. “Nonne cor nostrum ardens erat in nobis, dum loqueretur in via? Was not our heart burning within us, while he spoke to us on the way? These words of the disciples at Emmaus should rise spontaneously, if you are an apostle,” says St Josemaría, “from the lips of your colleagues at work, after meeting you along the ways of their lives.”[5]

Everything is based on prayer

How are we to sanctify our work and our apostolic activity? Edith Stein gives some shrewd advice: “Let go of your plans. The first hour of your morning belongs to God. Tackle the day’s work that he charges you with, and he will give you the power to accomplish it.”[6] In this way, by putting God first each day and directing ourselves first to our loving conversation with him, we will find the strength to work as God our Father wishes at every moment.

Our Lord himself leads us by example: St Mark tells us how, on a certain occasion, in the morning, a great while before day, he rose and went out to a lonely place, and there he prayed.[7] And St Josemaría comments: “I’m deeply moved by our Lord’s great need – St Mark records that it was a great while before day – to speak with his Eternal Father and entrust to him all the apostolate with souls he was going to do that day… We have no other option. At the start of each day’s labour at Christ’s side, ministering to the souls who seek him, the one thing we must do is turn to our Lord in prayer: only in prayer will we learn to serve others.” [8]

We know that, whether our time of prayer is full of those “good resolutions, affections and inspirations” that our Lord sometimes gives us, or whether it is sleepy or distracted; whether our Lord allows the sweetness of his presence to be felt in the soul or whether we find ourselves dry and in darkness, our perseverance in prayer is all-important. “Persevere in prayer,” St Josemaría encourages us. “Persevere, even when your efforts seem barren. Prayer is always fruitful.” [9]He taught that during the times of mental prayer we try to place ourselves in God’s presence, trying to maintain a conversation with our Lord and put aside for the time being the other concerns of the day. This is what the first Christians did and, for the twenty centuries of the Church’s history, their example has been followed by all those who want to live close to our Lord. Edith Stein made the same discovery in her interior life: “It all depends,” she writes, “on having a quiet little corner where you can talk with God on a daily basis as if nothing else existed… and regarding yourself completely as an instrument, so that you treat your most frequently demanded talents, not as something that you use, but as God working through you.”[10]

The science of the Cross

After the coming to power of Hitler and the passing of anti-Jewish laws, Edith found herself banned from all intellectual and teaching activity. In 1933, acting on a conviction that had been maturing in her heart for years, she joined the Carmelite convent in Cologne, taking the name Teresa Benedicta of the Cross. The name she chose was significant, for as St John Paul II wrote, “even after she found the truth in the peace of the contemplative life, she was to live to the full the mystery of the Cross”.[11] In 1938, as anti-Jewish violence increased, Edith was smuggled out of Germany, to the Carmelite convent of Echt in the Netherlands. But even there she was not safe. When the Dutch bishops spoke out courageously against anti-Semitism in 1942, the Nazis retaliated by arresting all Jewish Catholics for deportation; Edith and her sister Rosa were sent to Auschwitz, where they were immediately executed.

“Three days before her tragic end,” Pope Benedict recounts, “Edith Stein, approaching some sisters in the monastery of Echt… said to them: ‘I am ready for anything. Jesus is also here in our midst… I have said with all my heart: Ave, Crux, spes unica.’ And he notes how, as Edith went to her death, “she distinguished herself by her conduct full of peace, her serene attitude and her calm behaviour, attentive to the needs of all.”[12]

Edith Stein went serenely to that radical encounter with Christ’s Cross, because she had been living complete self-giving for many years. We all know well that the soul who perseveres in love will find the Cross on the way: “If you seek Christ as you should,” says St Josemaría in The Way, could you ask for a clearer sign than the Cross to know that you have found him?”[13] The spirit of Opus Dei leads us to conform to the Cross of Christ in a thousand and one ordinary, everyday details, part of the normal run of things, without show…In this way we can learn the “science of the Cross”[14] that St Teresa Benedicta of the Cross exemplified and that all Christians are called to live.

As we finish this time of prayer we turn to our Mother, who practised perfect self-giving at every moment of her life. As he spoke, a woman in the crowd raised her voice and said to him: Blessed is the womb that bore you and the breasts that you sucked! But he replied: Blessed, rather, are those who hear the word of God and keep it![15] We ask her for the fortitude and generosity to hear the word of God and keep it as she did, to place our work, our prayer, our daily sacrifice and our whole lives at God’s service.

[14] The title of Edith Stein’s last published work, a study of the spirituality of St John of the Cross for his fourth centenary.