30 girls from the Oakcrest School in Virginia joined the Sistine Chapel Choir at the Mass celebrated by Pope Francis on the Solemnity of Mary, Mother of God. With link to video recording of their singing in St. Peter's.

What is it like to sing with the Sistine Chapel Choir...in Rome...at St. Peter’s Basilica...on New Year’s Day... at a Mass celebrated by the Holy Father? Ask any of the 30 members of the choir from Oakcrest School, who recently returned from a once-in-a-lifetime trip to the Eternal City, and they will happily share their life-changing experiences. Sophomore Hannah Carter reflected, “Singing at the Papal Mass was one of the most incredible things I've ever experienced because not only were we singing for the Pope, we were singing in one of the most beautiful churches in the world built on over 2000 years of Catholic history. The presence of all the relics in the church and its architectural beauty truly heightened my senses and helped to bring more meaning to what I was singing.”

Oakcrest School, an all-girls independent school located in Vienna, Virginia, entrusts the doctrinal and spiritual formation offered to students to the Prelature of Opus Dei. The Oakcrest Chorus was invited to sing as part of the assembly choir and also had the privilege of singing a prelude, Ave Maria by Zoltan Kodaly. “This opportunity was beyond any honor or privilege I would imagine for our choir,” said Oakcrest music director, Anne Miller. 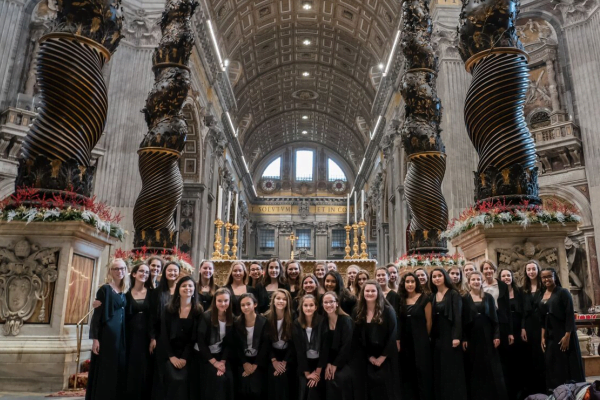 The Cappella Musicale Pontificia Sistina, under the direction of Msgr. Massimo Palombella, is the choir for the liturgical celebrations of the Supreme Pontiff. Present since the first centuries of the Church, it is one of the oldest choirs in the world.

While in Rome, the choir attended daily Mass at various holy sites including in front of the tomb of St. Peter. Students and accompanying adults visited the Vatican Museums and the major basilicas of St. Mary Major, St. John Lateran, and St. Paul Outside the Walls. They also attended a Papal audience with Pope Francis where they were publicly welcomed by representatives of the Vatican. Oakcrest’s chaplain, Fr. Marty Miller, concelebrated the Mass with Pope Francis. The musical pilgrimage included singing at Mass at the Basilicas of Santa Chiara and San Francesco in Assisi, as well as a day trip to Orvieto, where the travelers were blessed to be present during one of three times each year that the sacred corporal is exposed in Cattedrale di Santa Maria Assunta. 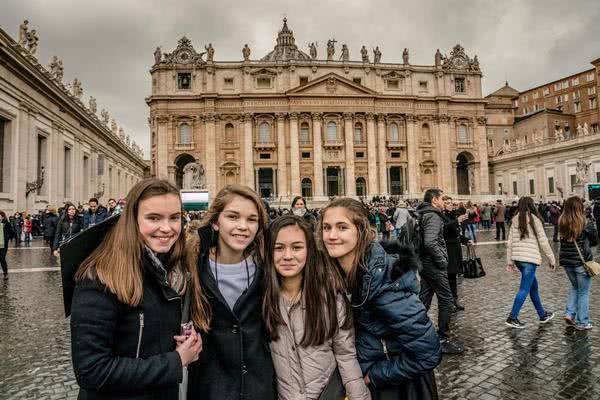 The obvious high point of the trip was singing at St. Peter’s at the January 1 Mass. (For a video recording of the choirs' performance in St. Peter's, click here.) Pope Francis has gained a reputation for being approachable and down-to-earth. Some have called Francis "The People's Pope." Sophomore Julia Fischer noted, “The most impactful moment of the trip for me was when we sang with the Sistine Chapel Choir at the Papal Mass. It was such a wonderful and awe-inspiring experience, and it was amazing to be celebrating Mass at St. Peter's Basilica with Pope Francis on the feast day of Mary Mother of God.”

Miller states that it is difficult to quantify these profound spiritual experiences; however, there are some highlights that stand out. Of course, nothing tops being at the Papal Mass, but choir members were also especially touched to see the joy their spontaneous moments of singing brought to others, such as singing in the piazza in front of Santa Chiara or on the Spanish Steps. In Orvieto, the choir surprised the owners of a panini shop as a special in-person thank you. The owners had returned a very important trip binder on the previous music pilgrimage. Miller shared, “We will never forget the look on their faces as we sang; they were truly touched. It is in these moments that we know how important the gift of music is in bringing the light of Christ to others.”

Following Mass at the Basilica di San Francesco, Miller was honored to meet a professor from Berklee College of Music (Boston, MA), who said that he had not been inspired to write music for a women’s choir until he heard the Oakcrest Chorus sing, having been especially moved by the Kodaly Ave Maria.The professor regularly provides music at this basilica and was visiting for the Christmas holiday. The chorus hopes to sing one of his works someday.

The purpose of music study at Oakcrest is to increase awareness of the Divine through the beauty of music. As future “trustees of humanity,” Oakcrest students learn that they shape culture through music – not only through performance and composition, but by what they choose to listen to, to promote, and to pass on to the next generation.

For over 40 years, Oakcrest School has provided an exceptional liberal arts education to girls of all faiths in grades 6 to 12 across Northern Virginia, Maryland, and Washington, D.C. As an independent school guided by the teachings of the Catholic Church, Oakcrest challenges and inspires young women to excel, while imparting a solid knowledge of the Catholic faith.

To learn more about an Oakcrest education visit Oakcrest.org.