On Sunday night, Fran Ruiz Anton died after a long illness. He was well known in the field of communications, and always remembered the time the founder of Opus Dei held him in his arms as a young child. 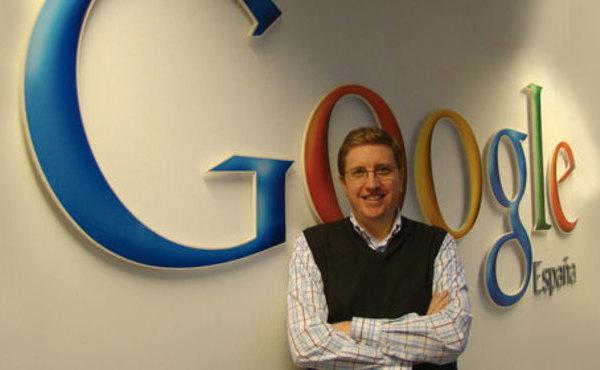 Original article in ABC: "Fran Ruiz Antón, de Google al cielo" Journalist Paloma Cervilla says the life of Fran Ruiz Anton could be summarized by the quote of St. Josemaria that sat on his desk. 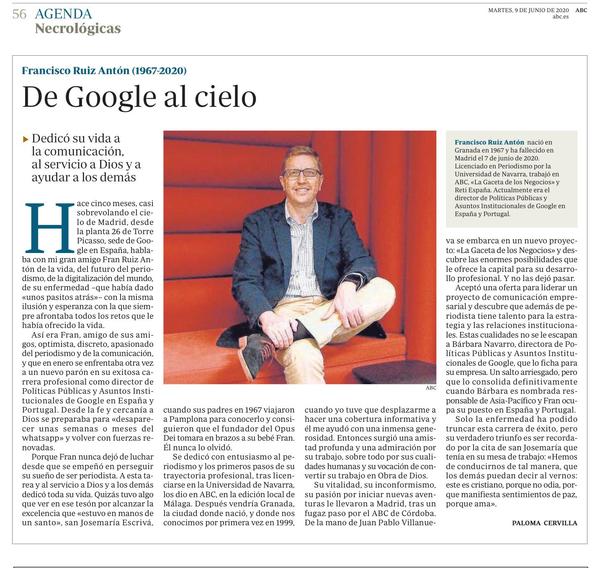 Five months ago, from the 26th floor of the Torre Picasso, practically flying over the Madrid sky from Google's headquarters in Spain, I was talking to my great friend, Fran Ruiz Anton, about many things: life, the future of journalism, the digitalization of the world, his illness – which had taken "a few baby steps backward" – all with the same enthusiasm and hope with which he always faced the challenges life had offered him.


THAT WAS FRAN: A FRIEND OF HIS FRIENDS, OPTIMISTIC, DISCREET, PASSIONATE ABOUT JOURNALISM AND COMMUNICATION

That was Fran: a friend of his friends, optimistic, discreet, and passionate about journalism and communication. In January he found himself having to take yet another break from his successful professional career as Google's Director of Public Policy and Institutional Affairs in Spain and Portugal. Drawing from his faith and closeness to God, he was preparing to "disappear for a few weeks or months from Whatsapp" to be able to return with renewed strength.

Because Fran never stopped fighting once he set out to pursue his dream of becoming a journalist. He dedicated his whole life to this task and to serving God and others. Perhaps this determination to achieve excellence had something to do with the fact that he "had been held by the hands of a saint," St. Josemaría Escrivá, when his parents traveled to Pamplona in 1967 to see the founder of Opus Dei, and managed to get their son Fran into his arms. He never forgot it. 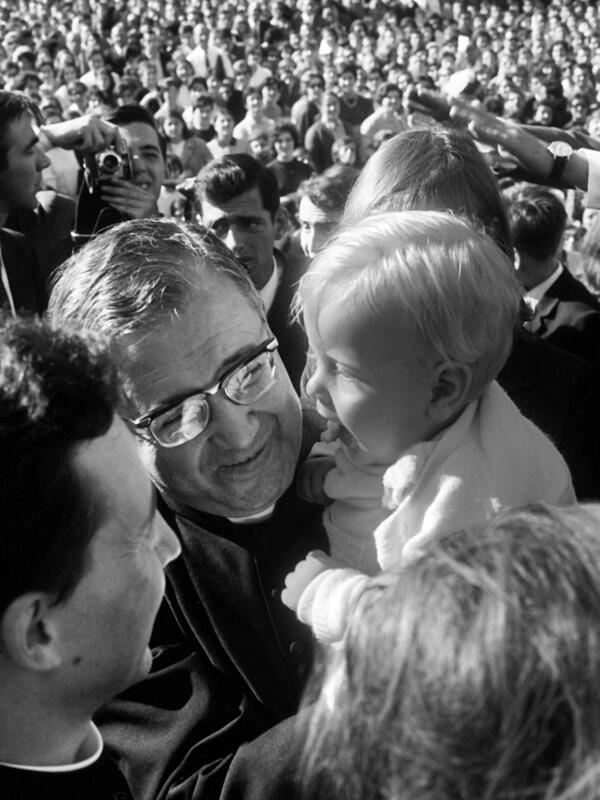 Fran devoted himself enthusiastically to journalism and, after graduating from the University of Navarre, took his first steps in his professional career at the Spanish newspaper ABC, working on the local edition in Malaga. Then came Granada, the city where he was born, and this is where we first met in 1999 when I had to travel there to do some news coverage and he helped me with great generosity. A strong friendship developed as well as admiration for the work he did, above all for his virtues and his vocation to turn his work into God's work.

Paloma Cervilla: "Today my great friend Paco Ruiz Antón – Fran to most people who knew him as Director of Public Policy at Google in Spain and Portugal – has left us. I can't be more proud of what people say about him. That's what he was: BIG inside and out."


His vitality, nonconformity, and passion for beginning new adventures took him to Madrid, after a quick stop at ABC in Cordoba. With Juan Pablo Villanueva, he embarked on a new project: "La Gaceta de los Negocios" and discovered the enormous possibilities for his professional development awaiting him in the capital. He didn’t pass on the opportunity.


HIS REAL TRIUMPH IS THAT HE WILL BE REMEMBERED AS SOMEONE WHO FIT THE DESCRIPTION OF THE QUOTE FROM SAINT JOSEMARÍA THAT SAT ON HIS DESK.

He accepted an offer to lead a business communication project and discovered that, in addition to being a journalist, he had a talent for strategy and institutional relations. These qualities did not escape the attention of Barbara Navarro, Director of Public Policy and Institutional Affairs at Google, who spotted him for her company. A risky leap that eventually paid off when Barbara was appointed head of Asia-Pacific and Fran took her place in Spain and Portugal.

Only illness could halt his successful career, but his real triumph is that he will be remembered as someone who fit the description of the quote from St. Josemaría that sat on his desk: "We have to conduct ourselves in such a way that others can say when they see us: this is a Christian, because he doesn't hate, because he spreads peace, because he loves."