For the past forty years, “Fr. Dick” was the much beloved and endearing chaplain of the Montrose School for girls in Medfield, Massachusetts. In these video clips, Fr. Dick talks about meeting St. Josemaria Escriva in Rome for the first time, as well as other memories.

Fr. Rieman was born in Chicago in 1925 and served as a Navy flyer in World War II. He returned to Chicago where he worked as a member of the Actors’ Equity Association on-stage productions, most notably as technical director for the great Chicago Railroad Fair from 1948-49, demonstrating, among other things, his skill as a horseback rider. He studied at DePaul University, receiving a B.S. in Sociology in 1951. During his studies, he met Fr. Joseph Muzquiz and Salvador Ferigle, who had just arrived in Chicago from Spain to begin Opus Dei’s apostolic work in the United States. Dick Rieman (as he was known) joined Opus Dei in 1950 and thus became the first member from the United States. During this time he was instrumental in the founding of Scepter Publishers (1952). 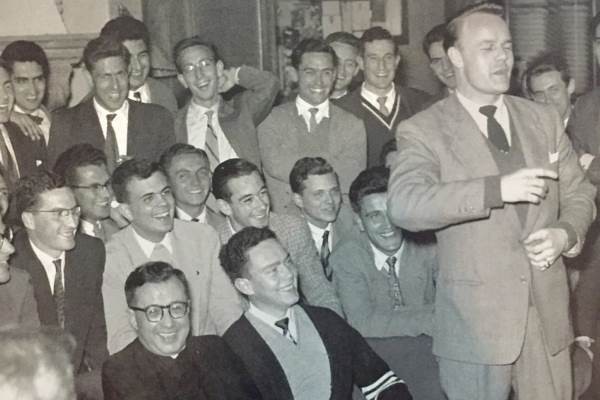 He corresponded with Opus Dei’s founder, St. Josemaría Escrivá, and in 1954 moved to Rome to live with him while studying at the Pontifical University of St. Thomas Aquinas (Angelicum). He received a doctorate in Canon Law in 1957 and was ordained to the priesthood in 1958 in Rome.


Returning to the United States that year, Fr. Dick lived for a few years in Washington DC, carrying out the apostolic activities of Opus Dei. He helped start The Heights Study Center, which later became The Heights School in Potomac, Maryland.


Fr. Dick then moved to Boston where he remained for the rest of his life. He first served as chaplain at two Opus Dei college residences, Trimount House for men and Bayridge Residence for women. Beginning in 1979 he served as the founding chaplain at Montrose School, where he said Holy Mass nearly every day and heard thousands of confessions. To all who knew him there, his great loves were the Eucharist, the Blessed Virgin Mary, and the sacrament of Reconciliation. With his warm smile, Fr. Dick had a knack for making every girl feel like she was the most important person in the world.

Fr. Dick had an amazing capacity for warm friendship and had hundreds of friends of all ages. An avid sports fan—especially Boston teams—he had played baseball in college and in his later years hockey and golf. But most of all he was known for his generosity and gracious sense of humor, as well as his dedication to the spiritual welfare of everyone he met. His cheerful demeanor affected the lives of countless men and women who loved him as a great friend.

A wake will be held in St. Mary of the Assumption Church, 420 High St., Dedham on Friday, December 6, from 3:00 - 8:00 pm and again on Saturday morning December 7, from 9:00 10:00 followed by a funeral Mass at 11:00. Interment will follow in St. Joseph Cemetery in West Roxbury (where Fr. Joseph Muzquiz and Fr. Sal Ferigle are also buried). There will be a reception afterwards at Montrose School in Medfield.

In lieu of flowers donations in memory of Fr. Dick may be made to the Montrose School, 29 North Street, Medfield, MA. 02052.

Tribute to Fr. Dick on the Montrose School website

Opus Dei Pioneer in Boston (story in The Pilot)