In his 2015 Lenten Message, Pope Francis asks the faithful to take part in the "24 Hours for the Lord" initiative, on 13-14 March, in order to place the Sacrament of Reconciliation at the center of the Church's mission for the new evangelization. 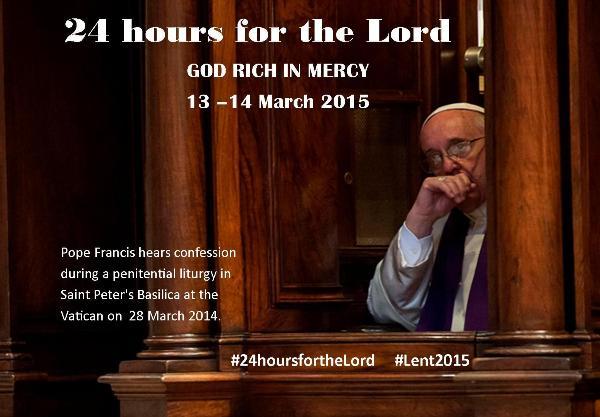 Pope Francis has asked Catholics across the world to take part in the 24 Hours for the Lord initiative for 2015, organized by the Pontifical Council for Promoting the New Evangelization. The initiative was received with great enthusiasm when it was introduced in 2014 and it will be celebrated once again in 2015 on Friday 13 and Saturday 14 March.

It is suggested to dioceses that people should be able to find special opportunities during these days for prayer and the Sacrament of Reconciliation. Pope Francis himself will be participating in the initiative and will preside at a penitential service in Saint Peter's Basilica in order to place the Sacrament of Reconciliation at the center of the Church's mission for the new evangelization.

In his Lenten Message for 2015, the Pope warned against the "globalization of indifference," and pointed to prayer, conversion and acts of charity as the best means to fight against this danger. "As individuals too, we are tempted by indifference. Flooded with news reports and troubling images of human suffering, we often feel our complete inability to help. What can we do to avoid being caught up in this spiral of distress and powerlessness?

"First, we can pray in communion with the Church on earth and in heaven. Let us not underestimate the power of so many voices united in prayer! The 24 Hours for the Lord initiative, which I hope will be observed on 13-14 March throughout the Church, also at the diocesan level, is meant to be a sign of this need for prayer.

"Second, we can help by acts of charity, reaching out to both those near and far through the Church's many charitable organizations. Lent is a favourable time for showing this concern for others by small yet concrete signs of our belonging to the one human family.

"Third, the suffering of others is a call to conversion, since their need reminds me of the uncertainty of my own life and my dependence on God and my brothers and sisters. If we humbly implore God's grace and accept our own limitations, we will trust in the infinite possibilities which God's love holds out to us. We will also be able to resist the diabolical temptation of thinking that by our own efforts we can save the world and ourselves.

"As a way of overcoming indifference and our pretensions to self-sufficiency, I would invite everyone to live this Lent as an opportunity for engaging in what Benedict XVI called a formation of the heart (cf. Deus Caritas Est, 31). A merciful heart does not mean a weak heart. Anyone who wishes to be merciful must have a strong and steadfast heart, closed to the tempter but open to God. A heart which lets itself be pierced by the Spirit so as to bring love along the roads that lead to our brothers and sisters. And, ultimately, a poor heart, one which realizes its own poverty and gives itself freely for others.

"During this Lent, then, brothers and sisters, let us all ask the Lord: Fac cor nostrum secundum cor tuum: Make our hearts like yours (Litany of the Sacred Heart of Jesus). In this way we will receive a heart which is firm and merciful, attentive and generous, a heart which is not closed, indifferent or prey to the globalization of indifference."