The Father yesterday, Sunday 15th December, spent his first full day in Kenya with a very robust schedule of activities. 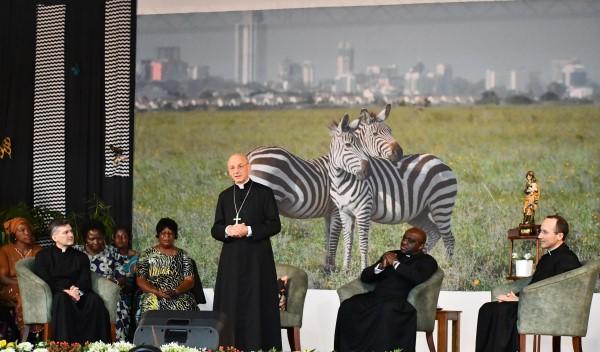 He begun the morning preaching and celebrating Holy Mass in Strathmore School.

Mid-morning found the Father in the Strathmore University, Madaraka Campus where he was able to greet some families coming to see him from Tanzania. He then met with a large group of members of Opus Dei in the Auditorium of the University.

A number of those attending got a chance to present the Father with mementos. Nicholas – the first supernumerary in Africa – gave the Father a small statue of some shepherd boys; Leshan a shuka and decorative neckpieces both worn by men in his Maasai community. A group from the Coast, installed him as a Mijikenda elder in a summarised ceremony.

But the heart of the get-together was most certainly the questions that many addressed to the Father, and that he answered with much simplicity. To John, the principal of a local boys’ day school querying on how he and his staff can give equal importance to all other aspects of formation to their students, rather than just on the academic, the Father emphasised that a true education addresses the intellect, the will and the heart. And that this education is imparted also through the environment of the campus, by how teachers treat students as individual persons, how tutors are vital and most certainly on the prayer of the teachers for their students. 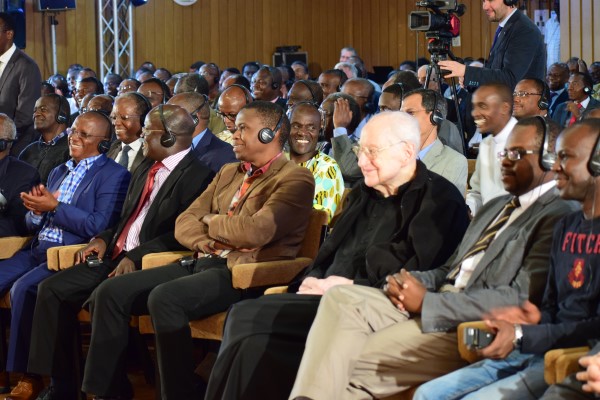 One businessman and father of four, Robert, queried the Father on how to deal with corruption that he encounters in his daily work. That same corruption that has so concerned the Conference of Catholic Bishops as to lead them to launch a nation-wide campaign against. The Father’s response on how to support the local bishops in this campaign took two angles: on one hand by completing our professional duties as well as we can; and on the other hand by helping those others we meet – our family and friends – to do the same. The Father also added very insightfully, that when we fight against corruption, when we reject it, we shouldn’t “…do it in a violent way, we reject corruption but not the corrupt person. Don’t look at that person as someone worse than you. Don’t despise that person. Look for the good of that person and the good of the country.”

After a few more questions, the get-together concluded just before midday.

At 4.30pm the Prelate was received again amidst ululations and joyful African songs which spoke volumes of the three weeks of joyful expectation for his visit. This time it was his daughters receiving him in Kianda School. A number of his daughters in traditional regalia bearing gifts on their heads as is custom, gave the Father a warm welcome with a procession of songs and dances from various local dialects. In the get together with his daughters, Mons. Ocariz commented on the joy of Advent and reiterated the importance of fostering a joyful spirit even in times of trial. 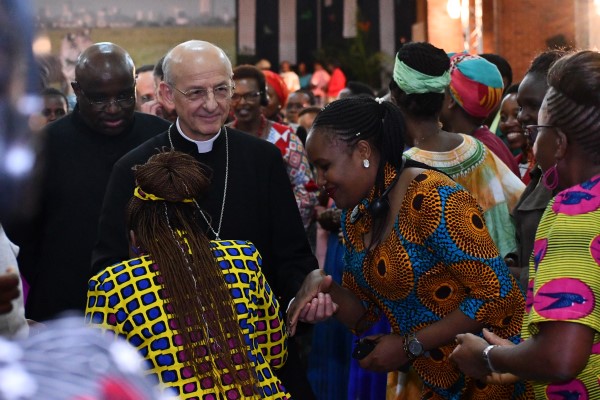 A number of social initiatives by some of the faithful of the Prelature were shared during this gathering. For instance, Domtila spoke of her Pregnancy Crisis Centre for young women in Kibra, a city slum, and the lives of the unborn babies that had been saved through her work. The Prelate assured her of his prayers. In response to Virginia, he spoke of the importance of living spiritual poverty or detachment, pointing out that happiness is not found in material possessions. He affectionately received the gratitude expressed by Eunice for his paternity by thanking her in turn for being his daughter. Mary expressed her admiration for the intense schedule of the Father and asked him for advice on how to make her time as fruitful in the apostolate. Her question led the Father to comment on friendship and the virtue of order. He outlined the importance of giving priority to our activities and working with serenity.

There was a light moment when Monica and Jennifer presented him with a Safari package to entice him to make a return visit. He delighted his daughters by trying on the Safari Hat. The gift pack also contained a backpack, a pair of binoculars, sunglasses and a map of East Africa. 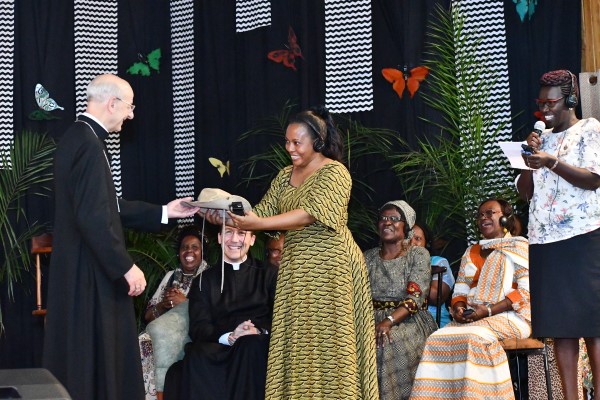 Responding to a question by Rose on how to react supernaturally to terminal illness, the Father spoke of the importance of the example of Our Lord when during his passion, he had to bear the sense of abandonment by God the Father. He encouraged his daughters to contemplate Him on the Cross and learn from Our Lord to abandon themselves in the hands of God.

He urged all present to intensify their prayer for the Holy Father and for the Church and reminded his daughters of the trust that Our Lord manifests in the mission that He has entrusted to them. After he imparted his blessing on them, the Father’s smiling departure was accompanied once more by the song and dance of his elated daughters.