Commentary on the Gospel: The Adulterous Woman

Gospel for the 5th Sunday of Lent (Cycle C) and commentary. 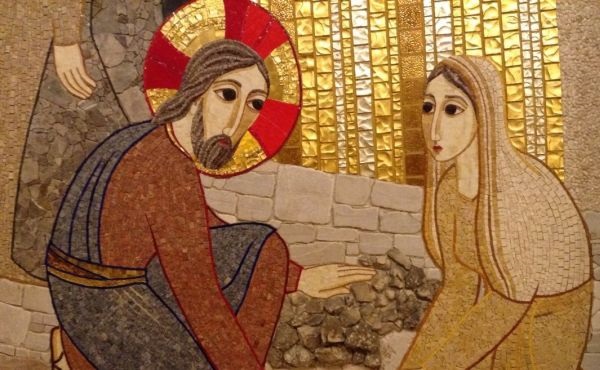 Jesus went to the Mount of Olives. Early in the morning he came again to the temple; all the people came to him, and he sat down and taught them. The scribes and the Pharisees brought a woman who had been caught in adultery, and placing her in the midst they said to him,

“Teacher, this woman has been caught in the act of adultery. Now in the law Moses commanded us to stone such. What do you say about her?”

This they said to test him, that they might have some charge to bring against him. Jesus bent down and wrote with his finger on the ground. And as they continued to ask him, he stood up and said to them,

“Let him who is without sin among you be the first to throw a stone at her.”

And once more he bent down and wrote with his finger on the ground. But when they heard it, they went away, one by one, beginning with the eldest, and Jesus was left alone with the woman standing before him. Jesus looked up and said to her,

“Woman, where are they? Has no one condemned you?”

And Jesus said, “Neither do I condemn you; go, and do not sin again.”

During this Lenten time of conversion, the Church invites us to contemplate a scene from the gospel of John. Some experts in interpreting the Law ask Jesus what they should do with a woman caught in adultery, a sin punished in the Law of Moses by stoning.

Their question seems to present Jesus with a difficult dilemma: choosing between carrying out justice with the sentence of death, or violating the Law. It is a deeply dramatic scene. That woman’s life depends on Jesus’ decision. But Jesus’ own life is also at risk, since he could be accused of encouraging a grave transgression of what is commanded, by not giving importance in public to the precepts of the divine Law.

Those experts pretend to show deference to Jesus and seem to recognize his moral authority, but only in order to trap him in his words and judge him harshly for them. But the Teacher calmly unmasks their hypocrisy, without becoming perturbed. As he listens to them, he begins to write on the ground with his finger. This gesture presents Christ as the divine Legislator, since, as Scripture tells us, God wrote the Law on stone tablets with his finger (Ex 31:18). Jesus therefore is the Legislator, he is Justice in person.

Jesus doesn’t violate the Law, but he doesn’t want to lose what he is seeking, since he has come to save what was lost. His sentence is just and without appeal: “Let him who is without sin among you be the first to throw a stone at her.”

“What then did He answer? See how full it is of justice, meekness and truth! O answer of Wisdom,” Saint Augustine remarks with admiration. “For without they stood to accuse and censure, themselves they examined not inwardly: they saw the adulteress, they looked not into themselves. You have heard then, ‘Let the law be fulfilled, let the adulteress be stoned.’ But is it by punishing her that the law is to be fulfilled by those that ought to be punished? Let each of you consider himself, let him enter into himself, ascend the judgment-seat of his own mind, place himself at the bar of his own conscience, and he will be obliged to confess himself a sinner.”[1] As Benedict XVI said, Jesus’ words “are full of the disarming power of truth that pulls down the wall of hypocrisy and opens consciences to a greater justice, that of love, which the fulfilment of every precept entails” (cf. Rom 13:8-10).[2]

The reaction of Jesus, who is Justice in person, is striking. He never utters a word of condemnation, but only of forgiveness and mercy. With gentleness and kindness, he invites the woman to convert: “Neither do I condemn you; go, and do not sin again.” God does not want sin and suffers for it, but He is patient and merciful.

Jesus never wants evil. He only wants what is good and life-giving. Therefore, in his great mercy, he instituted the sacrament of Reconciliation so that no one will be lost, so that we can all find the forgiveness we need, no matter how great our mistakes have been. As Pope Francis said: “Let us not forget this: God never tires of forgiving us! The problem is that we ourselves get tired, we do not want to ask, we grow weary of asking for forgiveness. He never tires of forgiving, but at times we get tired of asking for forgiveness. Let us never get tired, let us never get tired! He is the loving Father who always pardons, who has that heart of mercy for us all. And let us too learn to be merciful to everyone. Let us invoke the intercession of Our Lady who held in her arms the Mercy of God made man.”[3]