Commentary on the Gospel: The Entrance into Jerusalem

Gospel for Palm Sunday (Cycle A), and commentary. 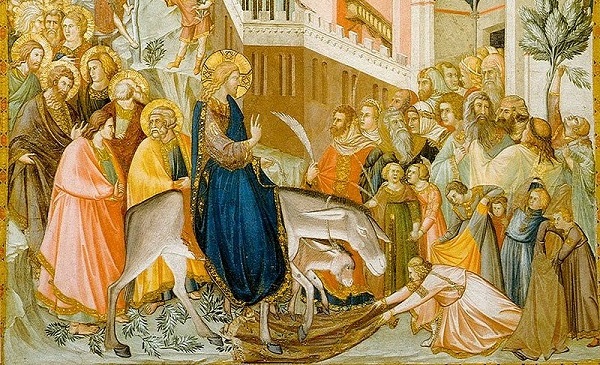 And when they drew near to Jerusalem and came to Bethphage, to the Mount of Olives, then Jesus sent two disciples, saying to them, “Go into the village opposite you, and immediately you will find an ass tied, and a colt with her; untie them and bring them to me. If any one says anything to you, you shall say, ‘The Lord has need of them,’ and he will send them immediately.”

This took place to fulfil what was spoken by the prophet, saying,

“Tell the daughter of Zion,
Behold, your king is coming to you,
humble, and mounted on an ass,
and on a colt, the foal of an ass.”

The disciples went and did as Jesus had directed them; they brought the ass and the colt, and put their garments on them, and he sat thereon. Most of the crowd spread their garments on the road, and others cut branches from the trees and spread them on the road. And the crowds that went before him and that followed him shouted, “Hosanna to the Son of David! Blessed is he who comes in the name of the Lord! Hosanna in the highest!” And when he entered Jerusalem, all the city was stirred, saying, “Who is this?” And the crowds said, “This is the prophet Jesus from Nazareth of Galilee.”


In this scene the words of the prophet Zechariah are fulfilled: “Rejoice greatly, O daughter of Zion! Shout aloud, O daughter of Jerusalem! Lo, your king comes to you; triumphant and victorious is he, humble and riding on an ass, on a colt the foal of an ass” (Zech 9:9). He is a king of peace, clothed in simplicity.

This marvelous Gospel passage speaks to us about Jesus’ humility, a virtue that is inseparable from the open acknowledgement of the truth. He arrives mounted not on a mighty steed but on a humble and peaceful donkey. But he is King! And his dominion extends to the ends of the earth (cf. Zech 9:10). What we glimpse in the prophet’s mysterious words is fully fulfilled in Jesus. Jesus is King, and therefore He enters Jerusalem with public acclaim, but without violence, without proclaiming an insurrection against the Roman army. His authority stems from simplicity, from God’s peace, which is the only salvific force. Saint Josemaria, in commenting of this passage, said: “When the time for his Passion draws near and Jesus wants to illustrate his kingship in a very vivid way, he makes a triumphant entry into Jerusalem, mounted on a donkey!”[1]

Blessed Alvaro del Portillo reminded us that Saint Josemaria “frequently mentioned that poor beast of burden, an instrument in Jesus' triumph. He saw there a portrait of all Christians who by their professional work, well-done for love of God, strive to make Christ present to their friends and colleagues, carrying Him in their lives and actions through the towns and cities, so that God alone is glorified.”[2] And he continued with words of Saint Josemaria: “For the donkey to carry our Lord, an apostolic soul had to go and untie it from the stall. So we too must go to the souls around us, who are awaiting an apostle's hand . . . to untie them from the stall of worldly things, so they can be a throne for our Lord.”[3]

Blessed Alvaro also pointed out that “the Gospel does not tell us the names of the two disciples Jesus sent to untie the donkey, but it does make clear that they did exactly as our Lord commanded . . . The docility of these two men, their exact fulfilment of the task entrusted to them, was a prerequisite for Jesus' triumphal entry into Jerusalem, in its turn a prelude to Christ's final triumph over sin a few days later on the altar of the Cross.”[4]

“The crowd spread their garments on the road” Jesus was to enter on (v. 8), as a sign of enthronement in the Davidic dynasty (cf. 2 Kgs 9:13). And they proclaimed Him Messiah with words from Psalm 118: “Blessed is he who comes in the name of the Lord! “— adding the cry, “Hosanna,” which means, “save us!, help us!” Their rejoicing reflects their hope in the imminent restoration of the reign of David and the longed-for redemption of Israel.

The Catechism of the Catholic Church sums up the passage succinctly: “Jesus’ entry into Jerusalem manifested the coming of the kingdom that the King-Messiah was going to accomplish by the Passover of his Death and Resurrection. It is with the celebration of that entry on Palm Sunday that the Church's liturgy solemnly opens Holy Week. ”[5]