When Christ Passes By

An excerpt from a homily of Saint Augustine about the curing of the blind men at Jericho, in Saint Matthew's gospel. 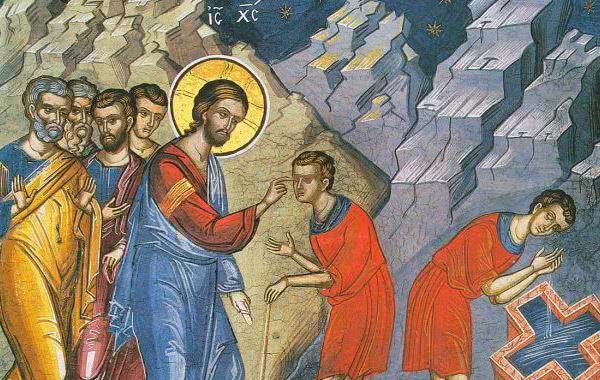 And as they went out of Jericho, a great crowd followed him. And behold, two blind men sitting by the roadside, when they heard that Jesus was passing by, cried out, “Have mercy on us, Son of David!” The crowd rebuked them, telling them to be silent; but they cried out the more, “Lord, have mercy on us, Son of David!” And Jesus stopped and called them, saying, “What do you want me to do for you?” They said to him, “Lord, let our eyes be opened.” And Jesus in pity touched their eyes, and immediately they received their sight and followed him (Mt 20:29-34).

Now what is it, Brethren, to cry out to Christ, but to correspond to the grace of Christ by good works? This I say, Brethren, lest we cry aloud with our voices, and in our lives be dumb. Who is he that cries out to Christ, that his inward blindness may be driven away by Christ as He is passing by, that is, as He is dispensing to us those temporal sacraments, whereby we are instructed to receive the things which are eternal?

When he shall begin to do all this, all his kinsmen, relations, and friends will be in commotion. They who love this world, will oppose him. What madness this! You are too extreme! What? Are not other men Christians? This is folly, this is madness. And other such like things do the multitude cry out to prevent the blind from crying out. The multitude rebuked them as they cried out, but did not overcome their cries. Let them who wish to be healed understand what they have to do.

Jesus is now also passing by; let them who are by the way side cry out. These are they who know God with their lips, but their heart is far from Him. These are by the way side, to whom as blinded in heart Jesus gives His precepts. For when those passing things which Jesus did are recounted, Jesus is always represented to us as passing by. For even to the end of the world there will not be wanting blind men sitting by the way side. Need, then, there is that they who sit by the way side should cry out. The multitude that was with the Lord would repress the crying of those who were seeking for recovery.

Brethren, do you see my meaning? For I know not how to speak, but still less do I know how to be silent. I will speak then, and speak plainly. For I fear Jesus passing by and Jesus standing still; and therefore I cannot keep silence.

Evil and lukewarm Christians hinder good Christians who are truly earnest, and wish to carry out the commandments of God which are written in the Gospel. This multitude which is with the Lord hinders those who are crying out, hinders those who are doing well, that they may not by perseverance be healed. But let them cry out, and not faint. Let them not be led away as if by the authority of numbers. Let them not imitate those who became Christians before them, who live evil lives themselves, and are jealous of the good deeds of others. Let them not say, Let us live as these so many live.

Why not rather as the Gospel ordains? Why do you wish to live according to the remonstrances of the multitude who would hinder you, and not after the steps of the Lord, who passes by? They will mock, and abuse, and call you back; do cry out till you reach the ears of Jesus. For they who shall persevere in doing such things as Christ has enjoined, and regard not the multitudes that hinder them, nor think much of their appearing to follow Christ, that is of their being called Christians. But who love the light which Christ is about to restore to them, more than they fear the uproar of those who are hindering them, they shall on no account be separated from Him, and Jesus will stand still, and make them whole.

To be brief; that I may conclude this Sermon, Brethren, with a matter which touches me very dearly, and gives me much pain, see what crowds there are which rebuke the blind as they cry out. But let them not deter you, whosoever among this crowd desire to be healed; for there are many Christians in name, and in works ungodly. Let them not deter you from good works. Cry out amid the crowds that are restraining you, and calling you back, and insulting you, whose lives are evil. For not only by their voices, but by evil works, do wicked Christians repress the good.

A good Christian has no wish to attend the public shows. In this very thing, that he bridles his desire of going to the theatre, he cries out after Christ, cries out to be healed. Others run together thither, but perhaps they are heathens or Jews? Ah! indeed, if Christians went not to the theatres, there would be so few people there, that they would go away for very shame. So then Christians run thither also, bearing the Holy Name only to their condemnation.

Cry out then by abstaining from going, by repressing in your heart this worldly concupiscence. Hold on with a strong and persevering cry to the ears of the Saviour, that Jesus may stand still and heal you. Cry out amidst the very crowds, despair not of reaching the ears of the Lord. For the blind men in the Gospel did not cry out in that quarter, where no crowd was, that so they might be heard in that direction, where there was no impediment from persons hindering them. Amidst the very crowds they cried out; and yet the Lord heard them. And so also do you even amidst sinners, and sensual men, amidst the lovers of the vanities of the world, there cry out that the Lord may heal you. Go not to another quarter to cry out to the Lord, go not to heretics, and cry out to Him there. Consider, Brethren, how in that crowd which was hindering them from crying out, even there were they who cried out made whole.