A Wedding During the Pandemic

Susanna and Salva got married at the beginning of April, with their family and friends following the ceremony by video livestream. With their 130 guests reduced to 4, it was still a joyous occasion. 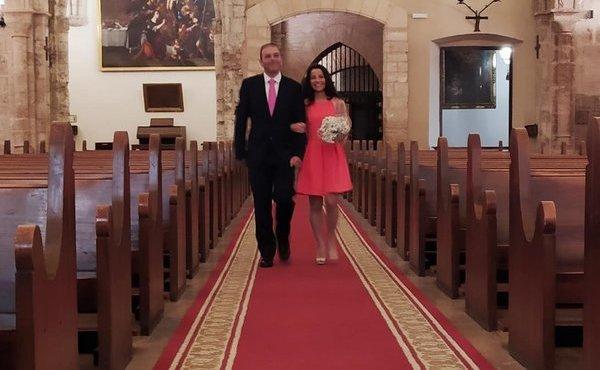 This article was originally published in El Periódico, a newspaper in Valencia, Spain, as "La boda que ganó al coronavirus"

Susanna had been praying to the Blessed Virgin Mary for a boyfriend; if possible, someone from the Spanish city of Valencia, because when a friend invited her to spend a few days there, she met a lot of charming men.

AFTER TWO AND A HALF YEARS OF COURTSHIP, THEY PLANNED TO GET MARRIED ON MARCH 21, BUT THIS, OBVIOUSLY, WAS IMPOSSIBLE

Providence was kind, and a few months later she met Salvador (a Valencian, of course). After two and a half years of courtship, they planned to get married this past March 21st, but this, obviously, was impossible. COVID-19 interfered and they had to improvise. After a lot of thought, especially because they wanted to go through the pandemic together and she was still living in her hometown of Girona, they decided to adapt to the circumstances. They said “I do” in private, with four people around them and dozens more streaming the ceremony from their homes. This is love in the middle of a pandemic.

Susanna is 38 years old and an architect. Salva is 45, an industrial engineer working at the ArcelorMittal steelworks. Susanna went to Valencia a week before the big day to check on everything: the last touches on her gown, details of the reception, music for the party, flower arrangements, the table plan… Everything that belongs to those last days before what is supposed to be the most beautiful day of a person’s life.

The first case of coronavirus in the peninsula had been diagnosed two weeks before: an Italian woman living in Barcelona brought the bug from her native country. As things escalated – in part because the customary "Fallas" festival was cancelled – family and friends started calling Susanna and Salva. They were very sorry but it might not be wise to travel; they would have to be absent. The Monday before the wedding, 50 of the 130 guests had already cancelled. They did not have to decide whether to go ahead, however, because with the emergency decree, the government made it necessary to change their plans completely. 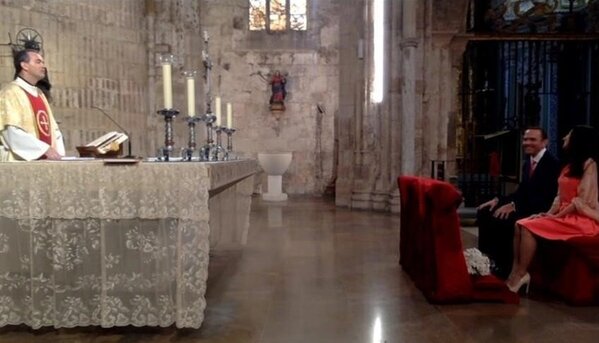 "We were very clear that we wanted to go ahead with it," says Salva. That clarity was undoubtedly driven by faith, since both are Catholics and always understood that living together required the sacrament of marriage.

They cancelled all their previous reservations and scheduled the marriage for March 19th, the feast of Saint Joseph, the same day, three years earlier, that Susanna asked the Blessed Mother for this favor. They were to have been married in the Basilica of St. Vincent Ferrer, but 24 hours earlier, they were told that it would not be possible because it was about to be closed: another obstacle to overcome. They found a replacement in the church of San Juan del Hospital.


IS THIS A LOVE STORY WITH A CATASTROPHIC BEGINNING? FAR FROM IT

"We had bought my dress and Salva's suit, but we decided to get married without these and save them for later, when all this is over and we can celebrate with another ceremony or thanksgiving – which we will enter together, as husband and wife," Susanna says. Is this a love story with a catastrophic beginning? Far from it. Salva says they have an unforgettable memory of the simple ceremony. "After how everything went, how the people who love us responded from a distance, I don't feel like we were cheated or like things were ruined.”

The altar looked like an Italian comedy, with the priest, two witnesses, a friend of the bride, and a second priest, who is a friend’s brother and who set up the technology so friends of the newlyweds could follow the ceremony from home, like a segment of the Tour de France.

Many family members and friends even dressed up for the celebration that followed the ceremony, which ended with the traditional throwing of the bouquet (caught by the only friend of the bride present). The flowers, by the way, were borrowed from the ones leaning against the statue of Our Lady. "When I can have my own bouquet, I'll come back to return the favor."

DURING THE CEREMONY, THE VIRTUAL GUESTS WERE SENDING MESSAGES TO THE BRIDE AND GROOM

During the ceremony, the virtual guests were sending messages to the bride and groom, narrating the event as it happened with phrases like, “a virus doesn’t stop this love,” and, “this wedding is historic.” As husband and wife, they took cars (each their own, in accordance with the government’s social distancing rules) and went to eat at Salva's parents' house. It was Susanna’s first meal at her in-laws' house. "The wedding menu was going to be great. We had gone to try it with one of my sisters and a godson and they had loved it. But that day we had rice soup, which was also perfect.”

The father of the bride didn’t get to walk his daughter down the aisle. The best man had to send the verse by text messaging. There was no waltz, no indecisive couple unable to make up their minds. "But it wasn't sad or dramatic, and everyone told us they could tell that we were happy and glad." They haven't had a honeymoon either. They were scheduled to fly to Sicily on Monday March 23rd and that day, they say, they made a paper plane, staying comfortably at home. They have to postpone it for the moment. Now it's time to learn to live together, and they will do so during the quarantine, since they spend 24 hours a day together in this confined honeymoon. And kids? "God willing." Amen.