Christian tradition is confident that Jesus appeared first to his Mother after rising from the tomb, as a reward for Mary's faith and suffering.

At daybreak on the third day, with the Sabbath over, Mary Magdalene, Mary, the mother of James, and Salome set out for Jesus' tomb. Love impelled them to complete the burial rites for the body of the Lord, so hastily begun on Friday afternoon. As they walked, they asked one another: Who will remove the stone for us from the entrance to the tomb? (Mk 16:3). For the stone sealing the tomb was a mill wheel that had taken several men to set in place. 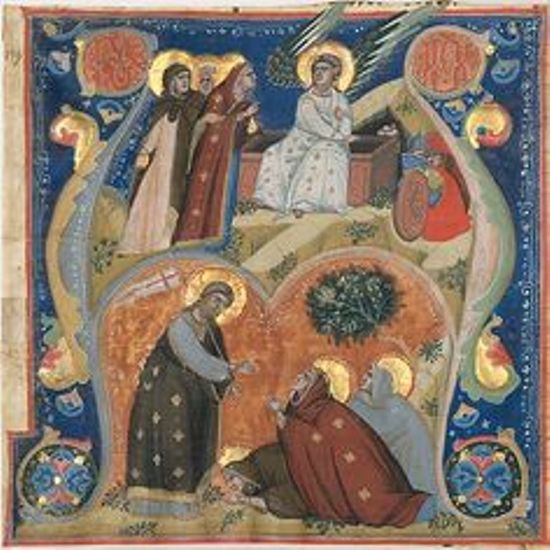 It is striking that the Evangelists make no mention of the Blessed Virgin here. After stressing her presence at the foot of the Cross, the Gospel accounts don't refer to our Lady again until after the Ascension, when St. Luke tells us at the beginning of the Acts of the Apostles that she was present in the Cenacle with the Apostles, the holy women who had followed our Lord from Galilee, and several of his relatives (cf. Acts 1:12-14).

This silence is very eloquent. Unlike everyone else, Mary firmly believed her Son's words when he foretold his resurrection from the dead on the third day. Thus, from earliest antiquity, Christians have liked to think that Mary spent the night of Saturday to Sunday morning in vigil, awaiting the moment when Jesus would fulfill his promise. We can easily speculate that Mary, with the help of John (who had not left her side since he had received her as mother at the foot of the Cross), had also tried to reunite the Master's disciples, in order to strengthen their faith and hope, especially those who had been cowards in those sorrowful moments.

While waiting for the new day to dawn—the dies dominicus, the Lord's day, as it soon came to be called—Mary was ever more deeply immersed in prayer. The faith and hope of the newborn Church was concentrated in her. Christian tradition has long taken it for granted that the first appearance of the risen Lord was to his Mother—not to help her to believe, but to reward her for her fidelity and to console her in her sorrow. Then, as the hours passed, the news spread from mouth to mouth—first among the disciples, who heard it from the women returning from the tomb, and then in ever wider circles.

But in Jerusalem, Christ's Crucifixion had failed to allay the animosity of the priests and the elders. The Apostles faced a serious accusation: that they had stolen and hidden their Master's body. Perhaps that is why the angels reminded the women (so that they might pass it on to the disciples) of what Jesus himself had told them before the Passion: that they should return to Galilee (cf. Mk 16:7).

"Mary was ever more deeply immersed in prayer. The faith and hope of the newborn Church was concentrated in her."

That first Sunday saw frequent trips back and forth between the Cenacle and the empty tomb, ending with the appearance of Jesus to the Apostles in the Cenacle. A week later he would appear to them in the same place (cf. Jn 20:19 ff.). Then they would have started back to Galilee, accompanied by Mary, along the roads they had often traveled in the joyful company of Jesus.

Awaiting further meetings with the Master, the Apostles returned to their work as fishermen (cf. Jn 21:1 ff.), while our Lady, staying in the house in Capernaum where she had previously lived, continued to strengthen them all in faith and love.

Each encounter with the Lord (the Evangelists relate only some of them) increased the disciples' joy and optimism regarding the future. Then, as the moment for the definitive departure drew near, Jesus met in Jerusalem with his closest followers to give them his last instructions and advice.

One afternoon, after their final meal together, they went to the Mount of Olives, with Jerusalem at their feet. There they had their last family gathering with the Master. Their hearts must have been sad, since they thought they would never see him again. But our Lord, knowing what they were thinking, assured them that he would stay with them in a new way.

He told them not to leave Jerusalem, but to await there the promise of the Father (cf. Acts 1:4). Then he ascended into heaven to share in God's lordship in his Sacred Humanity. As St. Luke recounts in detail: He took them out as far as Bethany and lifting up his hands he blessed them. And as he blessed them, he withdrew from them and began to ascend into heaven. They adored him and returned to Jerusalem with great joy (Lk 24:50-52). With them was the Mother of Jesus, who was also the Mother of each of them. And closely united to her, they awaited the coming of the promised Holy Spirit.