Life of Mary (IX): Adoration of the Magi

The series on Mary’s life pauses before the scene in Bethlehem when Wise Men come from the East to adore the Child.

After Jesus' Presentation in the Temple, the Holy Family returned to Bethlehem. In the hearts of Mary and Joseph, Simeon's prophetic words about the Child continued to resound. Mary would also have recalled texts in which the prophets of old spoke about the Messiah, her Son, saying that he would receive homage as King not only by Israel, but also by all the peoples of the world. 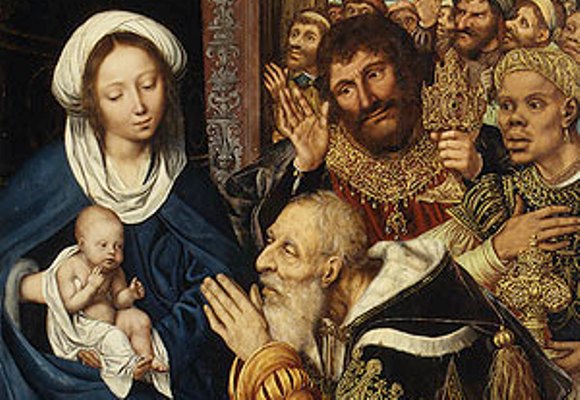 With particular eloquence, Isaiah had announced: The nations will walk in thy light, kings in the splendor of thy dawn. Lift up thine eyes and behold the scene: all will gather and come to thee… A multitude of camels will come to thee, dromedaries from Madian and Epha, all those from Saba will come bearing gold and incense, and singing the praises of the Lord (Is 60:3-6).

In the meantime, the days passed by in complete normality. Nothing indicated that anything out of the ordinary was about to occur. Until one day something extraordinary took place.

After the birth of Jesus in Bethlehem of Judea in the days of King Herod, Magi came from the East to Jerusalem, inquiring: 'Where is the newborn King of the Jews? For in the East we have seen his star, and have come to adore him' (Mt 2:1-2). St. Matthew records that when he heard of their inquiry, King Herod was disturbed, and all Jerusalem with him (Mt 2:3).

We know very little about those illustrious persons—only what the Scripture passage tells us. They were traveling from the East, where they had observed a star of extraordinary brilliance that led them to set out in search of the King of the Jews. Everything else—how many they were, their country of origin, the nature of that celestial light, the road they took—is a matter of conjecture, more or less well founded.

Western tradition speaks of “three kings," as they came to be called in the popular imagination, and even gives us their names—Melchior, Gaspar and Balthasar. Other Christian traditions increase their number to seven, and even twelve. Their point of origin could have been Mesopotamia, or more likely Persia. Their Persian origin gains weight from an historical event: When the Persian king Cosroes II invaded Palestine towards the beginning of the seventh century after Christ, he destroyed all the basilicas that Christian piety had built in the Savior's memory, except for one: the basilica of the Nativity in Bethlehem. And the reason he left it standing was that at its entrance was a representation of several men clothed in Persian robes, shown rendering homage to Jesus in the arms of his Mother.

"And entering the house, they saw the Child with Mary, his Mother; and prostrating themselves they adored him."

The word “magi," as the Gospel refers to them, had quite a different meaning than what we understand by that word today. These were not men who practiced magic, but most likely part of a priestly caste in Persia dedicated to studying the stars, disciples of Zoroaster, who are mentioned by numerous authors in classical Greece. Furthermore, it is a fact that the messianic expectation of Israel was known in the eastern reaches of the Roman Empire, and even in Rome itself. It is not strange, then, that some wise men belonging to the scholarly group known as magi—enlightened interiorly by God—had interpreted their discovery of a star of extraordinary splendor as a sign of the birth of the longed-for King of the Jews.

Although popular piety has closely connected the birth of Jesus and the arrival of the Magi in Palestine, we don't know exactly when it took place. All we know is that Herod felt threatened and inquired carefully from them the time when the star had appeared (Mt 2:7). Then he consulted doctors of the Law about the place where the Messiah was to be born. The Scribes responded by citing the prophet Micah: Thou, Bethlehem, land of Judah, are not the least among the principal cities of Judah; for out of thee shall come a leader who will bring peace to my people, Israel (Mt 2:6). Trying to deceive them, Herod sent the Magi to Bethlehem: Go and inquire diligently about this child, and when you have found him, notify me so that I may also go and adore him (Mt 2:8). His real intention was quite different, since Herod will soon kill all the male children two years old and under in Bethlehem and its environs, so as to be certain of the death of the one he thinks has come to claim his throne. From this we can deduce that the Magi may have arrived a year or a year-and-a-half after Jesus' birth.

After receiving this information, the Magi set out in haste for Bethlehem, rejoicing that the star was once again guiding them after it had mysteriously disappeared in Jerusalem. This fact points to the conclusion that the star was not a natural phenomenon—a comet, a conjunction of stars, etc., as many have tried to show—but a supernatural sign God gave to those chosen men, and only to them.

As soon as they left Jerusalem, St. Matthew continues, the star they had seen in the East went before them until it stopped above the place where the Child was. And entering the house, they saw the Child with Mary, his Mother; and prostrating themselves they adored him. Then they opened their coffers and offered him gifts: gold, frankincense, and myrrh (Mt 2:9-11).

The hearts of Mary and Joseph must have been filled with joy and gratitude—joy, because the prophecies about Jesus were beginning to be fulfilled; gratitude, because the gifts of those generous men, predecessors in the faith of so many Christians among the nations, contributed perhaps to relieving their precarious financial situation. Joseph and Mary could not repay their generosity. But those men considered themselves sufficiently recompensed by the smile from Jesus that brought new light to their souls, and by the warm words of gratitude from Mary, his Mother.