His Mercy Endures Forever: At the Beginning of the Jubilee Year

A new series of articles on the place of mercy in the Gospel and the corporal and spiritual works of mercy. 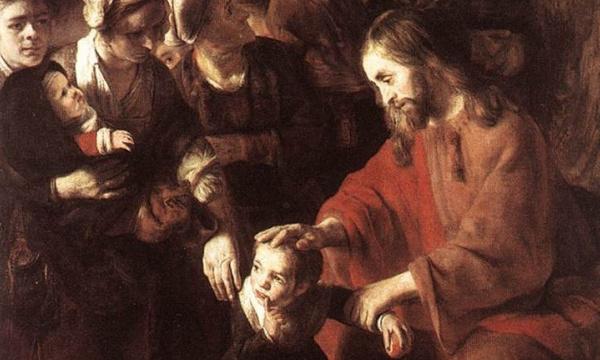 The Spirit of the Lord God is upon me, because the Lord has anointed me to bring good tidings to the afflicted; he has sent me to bind up the brokenhearted, to proclaim liberty to the captives, and the opening of the prison to those who are bound; to proclaim the year of the Lord’s favor.[1] Our Lord returns to Nazareth for the first time during his public life, and stands up to read in the synagogue. After being handed the Book of Isaiah, he reads aloud this passage referring to himself. On finishing he sits down and, to everyone’s amazement, says: Today this scripture has been fulfilled in your hearing.[2]

Before their eyes is the One who comes from God, who is God Himself, and who has come to take away the sins of the world.[3] But our Lord’s fellow countrymen were not prepared to receive him and reacted hostilely. They drove him out of the city and tried to throw him off a cliff, as though he were a false prophet. Then, the Gospel tells us in a mysterious passage, passing through the midst of them he went away.[4] Jesus went on his way, for nothing can detain God’s heart.

The freedom that only God can give

In convoking a jubilee, the Church knows she is the bearer of the Lord’s irresistible impetus: salvation is today. “Utinam hodie vocem eius audiatis: nolite obdurare corda vestra—O that today you would hearken to his voice! Harden not your hearts.”[5] In the Old Testament, God’s salvation is prefigured in the Jubilee Year, which took place every fifty years. On the completion of seven weeks of years[6]—seven times seven years—there began a year in which the slaves were freed, and each returned to their own property and family,[7] for men do not belong to others, but only to God.[8] If we wanted to summarize in one word what a jubilee meant for the People of Israel, it would be “freedom.”[9]

Today more than ever, freedom is a word on everyone’s lips. And yet we so often forget that freedom, in its deepest sense, comes from God. By his saving Passion, Death and Resurrection, Jesus freed us from the worst slavery, that of sin. Through the tender mercy of our God, when the day shall dawn upon us from on high to give light to those who sit in darkness and in the shadow of death, to guide our feet into the way of peace.[10]

The source of true freedom is God’s mercy. For a purely worldly logic, this statement might seem naïve. One might admit the need for a certain amount of mercy to smooth over human relationships, but only after having solved many more urgent problems. To put mercy in first place, Pope Francis said, “humanly speaking is foolish, but ‘the foolishness of God is wiser than men, and the weakness of God is stronger than men’ (1 Cor 1:25).”[11] The world needs mercy to escape from so many spirals of resentment, envy and frustration. Families and society need it.

The foolishness of God. From our Lord’s “yes” to becoming man, to being nailed to the Cross, to being received in the confines of the earth, a new seed of freedom arose in the world that now will never die. Christ’s glorious resurrection prolongs through the centuries the year of the Lord’s favor.[12] But until the end of the world, alongside the wheat weeds will grow;[13] along with the signs of our true liberation, we constantly see in history the signs of slavery. Satan wants to sift us like wheat, but our Lord has prayed for Peter, so that his faith will not fail. And Peter strengthens us in our own faith.[14] To a world that longs for a freedom it never succeeds in finding, the Church untiringly offers God’s mercy, which brings with it the freedom of the children of God.[15]

A clear spiritual path for the Church

“Amid the lights and shadows that have marked the path of Christians, interventions of divine indulgence have never been lacking. Through the Holy Spirit who dwells in the Church, and with the real presence of Christ in the Eucharist, along with our Lady’s constant intercession, the torrents of mercy constantly being poured out on the world are revealed to us.”[16] In 2002, Saint John Paul II (who had dedicated his second encyclical, Dives in Misericordia, to God the Father’s love for all mankind) proclaimed the Second Sunday of Easter as Divine Mercy Sunday, following a suggestion of Saint Faustina Kowalska, whom he had recently canonized. “This fire of mercy needs to be passed on to the world. In the mercy of God the world will find peace.”[17]

Pope Benedict XVI often echoed this urgent call of his predecessor. “Like Sister Faustina, John Paul II in turn made himself an apostle of Divine Mercy. On the evening of that unforgettable Saturday, 2 April 2005, when he closed his eyes on this world, it was precisely the eve of the Second Sunday of Easter. Many people noted the striking coincidence that combined the Marian dimension—the first Saturday of the month—with that of Divine Mercy. This was truly the core of John Paul II’s long and multi-faceted Pontificate. The whole of his mission at the service of the truth about God and man, and of peace in the world, is summed up in this proclamation.”[18] We also saw this providential coincidence in the Prelature; close to our Lady, Mater misericordiae, we have seen the final days of the Marian year for the family coincide with the beginning of the Jubilee of Mercy.

“God’s face,” said Pope Francis in his first Angelus address, “is the face of a merciful father who is always patient.”[19] The strength with which the Holy Father speaks about mercy is grounded in his own vocation. His episcopal motto, which he kept on being elected to the See of Peter, is now even more eloquent: miserando atque eligendo. These words allude to the vocation of Matthew. Jesus looked at him with great mercy and chose him for Himself.

“From the heart of the Trinity, from the depths of the mystery of God, the great river of mercy wells up and overflows unceasingly.”[20] The Pope’s decision to convoke a Jubilee of Mercy is a clear spiritual path for the Church, an impulse from the Holy Spirit for the present time. On the day following the opening of the Holy Door in Saint Peter’s, the Pope said: “The Church needs this extraordinary occasion. In this era of profound changes, the Church is called to offer her particular contribution, rendering visible the signs of the presence and closeness of God. The Jubilee is a favorable time for all of us, because by contemplating Divine Mercy, which overcomes all human limitations and shines in the darkness of sin, we are able to become more certain and effective witnesses.”[21]

The door of mercy

Give thanks to the Lord, for he is good: for his mercy endures forever.[22] In the rite for opening the Holy Door in Saint Peter’s Basilica, Psalm 117 (118) is sung, with the above verse being used for both the opening and closing ceremony. In this Psalm, mercy is seen as being closely linked to entering through the holy door or gate: Open to me the gates of righteousness, that I may enter through them and give thanks to the Lord. This is the gate of the Lord; the righteous shall enter through it.[23]

From a pragmatic point of view, a door is simply a place of passage that unites and distinguishes two separate areas. The door does not seem to have, in itself, any great importance. But the Holy Year invites us to stop and consider it as a symbol of our life, of our pilgrimage on earth: to consider what it means to cross over this threshold of hope, an expression Saint John Paul II liked to use.

In Scripture, the door or entranceway has great symbolic value. For example, the door to Abraham’s tent, where the Patriarch was seated when he received Yahweh’s visit;[24] or the entrance to the tent of the Encounter, where Moses spoke with God face to face;[25] or the gates of the city in Ezekiel’s great vision.[26] All these references converge in the passage in John’s gospel where our Lord refers to himself as the door of the sheep.[27]

The Holy Door reminds us, in a more vivid way, of where our salvation comes from: from God’s sheepfold, from God’s space, which He invites us to enter. “We have to be like a guard on sentry duty at the door of God our Lord: that’s what prayer is. Or like a small dog that lies down at its master’s feet.”[28] Salvation does not come from anything we can do, but from what God does for us. “Apart from God’s mercy there is no other source of hope for mankind.”[29]

We might sometimes think that really we have no door we can open to solve our problems, even quite small ones. Our goal becomes simply to “survive” somehow or other our fears and difficulties. We may prefer not to give them a name, not to think about them too much…. For even though we may be sick, we don’t really think that God can provide a remedy for what ails us. With deeds, more than with words, we often tell him: I will not live for ever. Let me alone, for my days are a breath.[30] And nevertheless God "goes out to meet those who do no seek him," [31] and He invites us to open a door of hope. The Jubilee is a “Holy Year to experience strongly within ourselves the joy of having been found by Jesus, the Good Shepherd who has come in search of us because we were lost.”[32]

What pleases God most

We have before us, then, a special opportunity to experience the liberating power of divine mercy. God is ready to forgive our sins and open our hearts to those around us. “This Jubilee, in other words, is a privileged moment for the Church to learn to choose only ‘what pleases God most.’ What is it that ‘pleases God most’? Forgiving his children, having mercy on them, so that they may in turn forgive their brothers and sisters, shining with the light of God’s mercy in the world. This is what pleases God most.”[33]

Reconciliation with God—which we receive in Confession, the sacrament placed at the center of the Jubilee Year[34]—opens a door to allow those around us to enter into our life. For God’s mercy is not simply a cloak covering our miseries, without really changing anything in our lives. On the contrary, his mercy radically transforms us, making us men and women who are merciful as the Father is.[35] We are such when we forgive those who have offended us; when we carry out, perhaps with effort, a work of charity; when we make the saving message of the Gospel known to someone living far from God. Drawing close to God’s mercy necessarily entails becoming instruments of his compassion towards those around us: “The heart of our God is a heart of mercy that has compassion on men and draws close to them. Our dedication to the service of souls is a manifestation of God’s mercy, not only towards us but towards all mankind.”[36]