Commentary on the Gospel: Transfiguration

Gospel for the Second Sunday of Lent (Cycle C) and commentary. 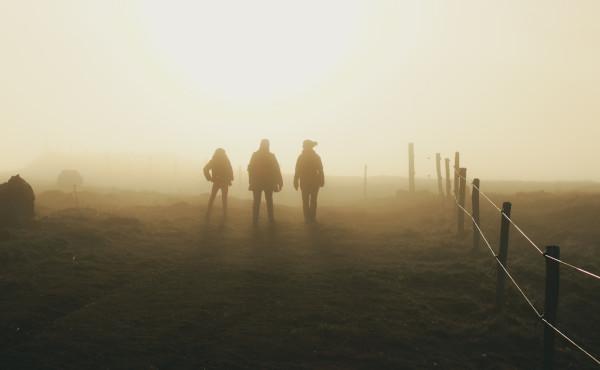 After these sayings he took with him Peter and John and James, and went up on the mountain to pray. And as he was praying, the appearance of his countenance was altered, and his raiment became dazzling white. And behold, two men talked with him, Moses and Elijah, who appeared in glory and spoke of his departure, which he was to accomplish at Jerusalem. Now Peter and those who were with him were heavy with sleep but kept awake, and they saw his glory and the two men who stood with him. And as the men were parting from him, Peter said to Jesus,

“Master, it is well that we are here; let us make three booths, one for you and one for Moses and one for Elijah”—not knowing what he said.

As he said this, a cloud came and overshadowed them; and they were afraid as they entered the cloud. And a voice came out of the cloud, saying,

And when the voice had spoken, Jesus was found alone. And they kept silence and told no one in those days anything of what they had seen.

The second Sunday of Lent presents us with one of the most beautiful and revealing pages in Sacred Scripture: the Transfiguration of Jesus. On a high mountain, our Lord reveals his glory to his three closest disciples to prepare them for his imminent Passion. What he had announced some days before was thus fulfilled: “But I tell you truly, there are some standing here who will not taste death before they see the kingdom of God” (Lk 9:27). Luke makes us see that all this happened “as he was praying.”

This “preliminary Paschal apparition,” as Pope Francis called it,[1] transcends barriers of time and space and is laden with rich theological meaning. As the Apostle Peter told the first Christians: “We were eyewitnesses of his majesty. For when he received honor and glory from God the Father and the voice was borne to him by the Majestic Glory, 'This is my beloved Son, with whom I am well pleased,' we heard this voice borne from heaven, for we were with him on the holy mountain” (2 Pet 1:16-18).

In the Bible the mountain represents God’s closeness to us. There Moses and Elias entered into intimate dialogue with the Lord (cf. Exod 24 and 1 Kgs 19). Both figures now appear in glory and speak with Jesus about his departure (exodus) at Jerusalem. They represent the Law and the Prophets, who announce the mystery of the Passion and Resurrection of the Messiah, as the risen Jesus will explain to the disciples from Emmaus (cf. Lk 24:1ff.). In this passage “the whole Trinity is revealed: the Father in the voice, the Son in the man, and Spirit in the bright cloud.”[2]

Nevertheless, the most important teaching contained here is the invitation the voice makes concerning Jesus: “listen to him!” Moses had announced that God would raise up a prophet like himself, one to whom the people must listen (cf. Deut 18:15). The voice presents the new Moses: the Son who reveals the Father to us with authority and to whom we should pay heed. Hence we need to follow the Master’s example: to “scale” the mountain of prayer, to reserve in our schedule some time each day to dialogue exclusively with God. In this personal and intimate dialogue we can tell Jesus, with words of Saint Josemaria: “Lord, we are ready to heed whatever you want to tell us. Speak to us: we are attentive to your voice. May your words enkindle our will so that we launch out fervently to obey you.”[3]

Saint Josemaria saw in this passage our loving search for the Face of Jesus and his Most Holy Humanity: “Jesus, we want to see you, to speak to you! We want to contemplate you, immersed in the immensity of your beauty, in a contemplation that will never cease! It must be wonderful to see you, Jesus! It must be wonderful to see you and be wounded by your love!”[4] It is worthwhile to persevere in these daily times set aside for prayer, keeping our Lord company, with the eagerness expressed by the Psalmist: Vultum tuum, Domine, requiram (Ps 26:8). Lord, I long to see your face. Our humble perseverance will be well rewarded. The face of Moses “shone because he had been talking with God” (Exod 34:29). And Jesus, who is “Light from Light,” as we profess in the Creed, will also gradually transfigure us with his grace so that our daily life, our work and our dealings with others will be illuminated by the presence of God in our soul.

Peter’s reaction, “it is well that we are here; let us make three booths,” expresses the joy of the encounter with God. It also points to the “eternal dwellings” which the Messiah was to reestablish (Lk 16:9), and which the Jews commemorate in the feast of tabernacles. Peter wants to hold fast to that moment of happiness brought about by intimate contact with God. But as Benedict XVI said in his final Angelus address: “prayer does not mean isolating oneself from the world and its problems … The Christian life consists in continuously scaling the mountain to meet God and then coming back down, bearing the love and strength drawn from him, so as to serve our brothers and sisters with God’s own love.”[5] The clear proof that we are listening to the Son as the Father’s voice asks us to do is that his Spirit fills us with apostolic eagerness to bring God’s light to all mankind.