This biographical timeline covers basic dates and occurences in St. Josemaria's life. At various points there are links to more detailed information found on the St. Josemaria Website.

Significant dates in the life of St. Josemaria Escriva

1904 Inexplicably cured of grave illness after doctors had given up hope. Fulfilling a promise to the Blessed Virgin Mary, his parents take him to the nearby Shrine of Our Lady of Torreciudad in thanksgiving.

1910 His sister Rosario dies at nine months of age.

1915 His father’s business fails and the family moves to Logroño, where his father works in a clothing store.

1917 During Christmastime, sees the footprints of a discalced Carmelite in the snow. Begins to think that God is asking something of him, but does not know what it is.

1919 Begins taking classes for the priesthood at the seminary in Logroño to prepare for what God will ask him to do. His brother Santiago is born.

Expanded biography: Footprints in the Snow

1920 Moves to Saragossa to enter the Seminary of San Carlos.

1922 Appointed Student Director (Prefect) when he is only twenty years old. Receives the tonsure and Minor Orders.

1923 Begins studies of Civil Law at the University of Saragossa, while continuing his seminary studies.

1924 His father dies in Logrono. Becomes responsible for supporting his family (mother, sister and brother). Ordained subdeacon and deacon.

1927 After completing his Licentiate degree in Civil Law, moves to Madrid to pursue doctoral studies. Works as chaplain to the Foundation for the Sick of the Apostolic Ladies of the Sacred Heart of Jesus.

Expanded biography: Among the Poor and Sick

1928 On October 2, “sees” Opus Dei, while on a spiritual retreat in Madrid. Begins looking for those who will can join him in his new work.

1931 Appointed Chaplain to the St. Elizabeth Foundation and ceases being chaplain for the Foundation of the Sick.

1934 DYA Academy is converted to a university student residence.

1936 At the outbreak of the civil war in July, abandons the student residence, stops dressing as a priest, and goes into hiding at various houses. In October, takes refuge in a psychiatric clinic, the Casa de Reposo y Salud, directed by his friend Dr. Suils.

1937 March: the clinic becomes too dangerous and he takes refuge at the Honduran Legation with a few other members of Opus Dei. October: leaves Madrid for Barcelona. November: crosses the Pyrenees into Andorra on foot with members of Opus Dei and others. December: reenters Spain in the Nationalist zone and arrives in San Sebastian.

1938 Settles in Burgos and restarts his pastoral work, visiting members of Opus Dei and friends who are at the fronts. Preaches several retreats. Works on his doctoral thesis in law and on his book, The Way.

1939 Returns to Madrid and opens a new the student residence. Begins activities of Opus Dei in Valencia, Barcelona, Valladolid, Saragossa, Bilbao, Sevilla, and Santiago. Receives his doctoral degree in Law at the University of Madrid. PublishesHoly Rosary and The Way.

1941 The Bishop of Madrid approves Opus Dei as Pious Union. His mother dies in Madrid.

1943 Founds the Priestly Society of the Holy Cross which allows for the ordination of priests in Opus Dei. Opus Dei receives the nihil obstat of the Holy See (October) and is erected in the diocese of Madrid (December).

1954 Suddenly cured of the diabetes he had suffered for 10 years. Opus Dei begins apostolic work in Ecuador.

1955 Obtains the doctorate in Theology from the Lateran University of Rome.

1956 Appointed Consultor of the Congregation for Seminaries and Universities.

Expanded biography: Of a hundred souls, we are interested in a hundred

1961 John XXIII appoints him Consultor to the Pontifical Commission for the Authentic Interpretation of the Code of Canon Law.

1967 Second Assembly of the Friends of the University of Navarre. Preaches the “Campus homily” Passionately loving the world.

1970 Construction of the Shrine of Torreciudad begins. Travels to Mexico, where he preaches to thousands of people.

1972 Makes a two-month apostolic trip through Spain and Portugal, meeting numerous people and holding many large get-togethers which are filmed.

1973 Publishes Christ Is Passing By, a collection of 18 homilies.

1974 From May to August makes an apostolic trip through Brazil, Argentina, Chile, Peru, Ecuador and Venezuela.

Expanded biography: I Seek Your Face

1975 Returns to South America and visits Venezuela and Guatemala until illness forces him to return to Rome. Celebrates his priestly golden jubilee.

June 26, 1975 Dies in his office. Buried in the crypt of the present Prelatic Church of Our Lady of Peace, in the central headquarters of Opus Dei. In September Alvaro del Portillo is elected his successor. Opus Dei is established in 31 countries and has over 60,000 members, including over 1000 priests.

Expanded biography: I Will Help You More

1977 Publication of Friends of God, a second book of homilies.

1981 His cause of canonization is opened. Publication of Via Crucis (Way of the Cross).

1986 Publication of Furrow. Final testimonies are taken and about 8,000 pages of documents are delivered to the Congregation for the Causes of Saints. 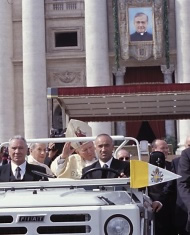 1990 The Decree proclaiming his heroic virtues promulgated. He acquires the title “Venerable”.