Commentary on the Gospel for Easter Sunday: Jesus is alive!

Gospel for Easter Sunday (Cycle B), and commentary.

Inspiration for Your Prayer 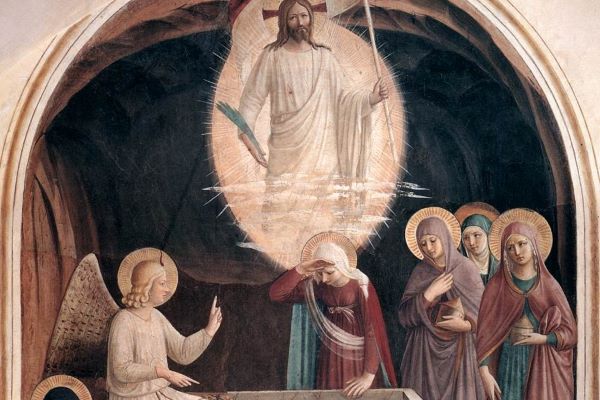 Now on the first day of the week Mary Magdalene came to the tomb early, while it was still dark, and saw that the stone had been taken away from the tomb. So she ran and went to Simon Peter and the other disciple, the one whom Jesus loved, and said to them, “They have taken the Lord out of the tomb, and we do not know where they have laid him.”

What would Jesus’ Resurrection have been like? How did his tortured Body come back to life and become a glorious Body? We don’t know. The only witnesses to this astounding event were the empty tomb, with the winding cloths and the face cloth. These silent witnesses are the first to announce that something entirely new has happened.

John is the first to “read” and understand the message of the linen cloths and the face cloth. A few days earlier he had been the courageous disciple who stood firm at the foot of the Cross, next to his Lord. Now he is the disciple who runs the fastest to seek Christ. The same one who stood patiently close by during the time of trial now moves the quickest in seeking Him. He is sustained by the same strength in both situations: his love for our Lord. And his love is rewarded. God grants him a special grace to read in the folded cloths the greatest message in history: Jesus is alive!

But John isn’t the only one who runs that Easter Sunday morning. Before him Mary Magdalene had run to tell the apostles the astounding news. The strength of her love is also very intense. Love for our Lord had led her to rise early that morning. She wanted to do one last service for Jesus, without expecting anything in return. And she will be the first to contemplate the Risen Lord in his glory, and to proclaim to the Church that He is alive.

Peter too runs. He is a bit slower in reaching the tomb. He has neither Mary Magdalene’s impetuousness nor John’s youthfulness. But he reaches the tomb and is the first to enter. He sees the signs of the Resurrection – the linen cloths and the face cloth – even if it takes him longer to believe, perhaps because the wound he carries is deeper. The pain of the Master’s death is joined to the memory of his having abandoned Him during the Passion. But despite everything, he too runs. His love is still there; it just has to grow stronger.

How difficult it was for the disciples to believe that Jesus had come back to life! And how difficult it can be for us to accept that Jesus upholds our own lives! Sometimes the tomb seems to prevail: problems at work or at home, flaws in our own character, opposition to Christian values in certain environments... But if we look closely at these situations, we can surely find signs of hope: other persons who are tenaciously trying to do what is right and to defend the good, a solution to a difficult problem that suddenly appears... These are signs that are waiting for us to read them with faith, like those linen cloths on the morning of the Resurrection.

To read the signs God gives us, we need to welcome the gift of faith. We too need the sincere eagerness to seek our Lord, also when it seems He has left us. That is what Mary Magdalene, John, and Peter did that Easter morning. They were still seeking Christ; they wanted to offer Him a service, even though they thought He was dead. Our Lord rewards their faithful love with the joy of finding Him alive, luminous with the glory of Easter.

(Image: "The Resurrection and the Women at the Empty Tomb," Fra Angelico. Wiki Commons).