First Luminous Mystery: The Baptism of Jesus in the Jordan

Pope John Paul II stated in Rosarium Virginis Mariae (10) that “No one has ever devoted himself to the contemplation of the face of Christ as faithfully as Mary.” Here are some texts that can help us contemplate the first Mystery of Light as we near the end of this Year of the Rosary.

From the Gospel of St. Matthew:

Then Jesus came from Galilee to John, at the Jordan, to be baptized by him. And John was for hindering him, and said, “It is I who ought to be baptized by thee, and dost thou come to me?” But Jesus answered and said to him, “Let it be so now, for so it becomes us to fulfill all justice.” Then he permitted him. And when Jesus had been baptized, he immediately came up from the water. And behold, the heavens were opened to him, and he saw the Spirit of God descending as a dove and coming upon him. And behold, a voice from the heavens said, “This is my beloved Son, in whom I am well pleased.” (Matthew 3:13-17)

All men are children of God. But a child can look upon his father in many ways. We must try to be children who realize that the Lord, by loving us as his children, has taken us into his house, in the middle of the world, to be members of his family, so that what is his is ours, and what is ours is his, and to develop that familiarity and confidence which prompts us to ask him, like children, for the moon!

A child of God treats the Lord as his Father. He is not obsequious and servile, he is not merely formal and well mannered: he is completely sincere and trusting. Men do not scandalize God. He can put up with all our infidelities. Our Father in heaven pardons any offence when his child returns to him, when he repents and asks for pardon. The Lord is such a good Father that he anticipates our desire to be pardoned and comes forward to us, opening his arms laden with grace. (Christ is Passing By, 64)

A Christian knows that he is grafted onto Christ through baptism. He is empowered to fight for Christ through confirmation, called to act in the world sharing the royal, prophetic and priestly role of Christ. He has become one and the same thing with Christ through the Eucharist, the sacrament of unity and love. And so, like Christ, he has to live for other men, loving each and every one around him and indeed all humanity…

You cannot separate the fact that Christ is God from his role as redeemer. The Word became flesh and came into the world “to save all men.” With all our personal defects and limitations, we are other Christs, Christ himself, and we too are called to serve all men… 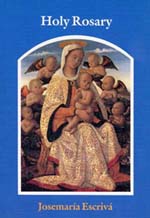