On March 14th, 1946, Dora del Hoyo became the first to join Opus Dei as an assistant numerary. She has inspired thousands of women all over the world to dedicate themselves to spreading the universal call to holiness through their professional work of caring for the home. 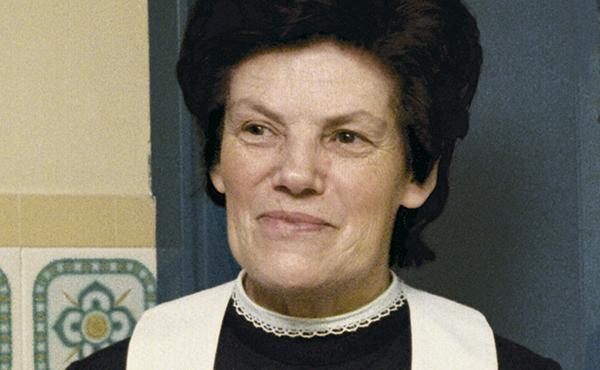 In 1945, the Founder of Opus Dei approached his daughters with a new project, a new "locura" (or "crazy idea"): to open another student residence - this time, in Bilbao - which would start in September that same year. Thus, they would need to form a team for the administration of the house. Encarnita and Nisa, two of the first women in Opus Dei, thought of Dora, who at that time was working in the Moncloa Residence in Madrid and whose work had made a good impression on them. Who better than Dora, they thought, to ensure that the new project would start out on the right foot?

During the summer, while Dora was spending the summer months at home with her parents, Nisa wrote to her with the proposition. Dora later recalled that her father gave her the letter without opening it, as it was addressed to her, but he commented, "For sure they are calling you to go help at that residence". After learning that they were awaiting her in Bilbao, Dora declared, "I am not going to that house." Her father responded, "Why not? You gave your word that you would go, so you should go. If you don't like it, just come back."(1) It was exactly the opposite of what had happened when she had announced her plan of going to Germany some time earlier. For this reason, Dora used to say, "I especially owe it to my father that I became part of the Work." (2)

And so Dora went to Bilbao. Another employee of the Moncloa also went with her: Concha Andres. The situation of the Residence was similar to what they had encountered in January of 1944 in Madrid: an unfinished house, a kitchen that didn't run well, laundry that had to be done in the bathroom... There, "Dora del Hoyo did everything: she cooked along with Concha Andres - above all when the actual cook got angry because of the indicated menu and didn't want to cook - she did the cleaning, ironing. She cleaned and waxed the wood floors, keeping them clean and shiny." (3)

But they were happy. On January 6 - the feast of the Epiphany, in which it is customary to give gifts in Spain - Dora received a present which she really liked: a copy of The Way, one of the first book to be published by St. Josemaria. She herself explained what role it played in her spiritual life: "I was very enthused by the Way, and many times we would do spiritual reading with a small section of the book. With each thing that I heard, I thought, 'This is for me.' I liked it a lot and I read it all in one sitting - I didn't sleep until I had finished it. The next day, (Nisa González Guzmán, the director of the residence), asked me, 'Did you like the Way?' I answered her that I liked it a lot - that once I started, I couldn't put it down until I had finished, because it was so beautiful."

Dora began to feel that God wanted something more of her - that He was asking for her whole heart. She was 31 years old, close to 32. She explained to her parents that she was thinking of giving her life to God in celibacy, to find holiness in ordinary work in the middle of the world, and she explained that she would live with other women of Opus Dei. Although she would be separated from her parents physically, she told them that she would write them frequently.

Once again it was her father who advised her with prudence and clarity. He commented that she was old enough to freely choose whatever path she considered best, but that she should think it over very well beforehand, especially because if she decided to give herself completely to God, it would be for always: she wouldn't want to abandon the way later on.

On March 14th, 1946 she asked to be admitted in Opus Dei; on the 17th, Concha Andres did the same. They were the first two assistant numeraries in the world, dedicating themselves professionally as homemakers.

St Josemaría received their letters on the feast of St. Joseph, and later commented that, "it was the best gift he had ever received on St. Joseph's day."