One afternoon while taking a walk with my wife and young son – recounts Reyes, a retired language teacher in Granada – a man playing the accordion on a street corner came up to me and gave me a big hug, thanking me for the classes I gave him in prison. 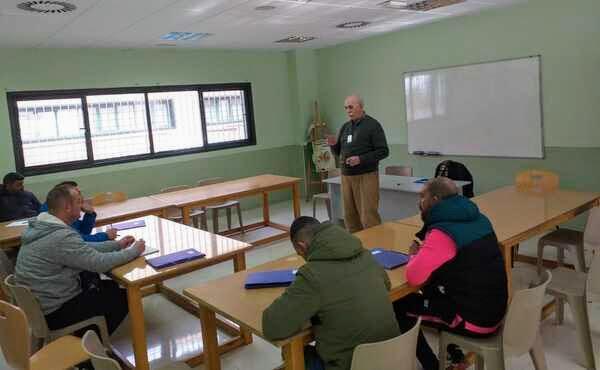 He told me about his life since completing his prison sentence for murder, as my wife and son listened to his story with amazement. I have never felt so highly rewarded for something so normal as giving classes.

Prisons today no longer have thick walls and bars separating the inmates from freedom. Everything is mechanized and, except for a ticket to “get in line,” the prison entrance has the appearance of a social service office.

Now that I’m retired, as I said, I help out in the prison by giving classes, with the satisfaction of sharing with the inmates their sufferings and joys, their disappointments and dreams, their desire for freedom, and above all their ardent wish to be with their families again.

I write the outline of the day’s tasks on the blackboard. The material we cover is varied and subject to the daily life of the prison. Which is to say, it’s not very orderly, since permission to attend, changes in the choice of workshop areas, visits from outside, and other things can all make a continuous and consecutive program difficult. The teacher has to give a potpourri of material that we could call “humanities”: literature, grammar, history, basic concepts of logic, geography… In sum, a little of everything.

At the start, it surprised me that the men wanted to come to my classes. Later I realized that, in general, for them the class is a place of peace and quiet where they can discuss things with the teachers that interest them given their experiences in life. Others attend because they have a particular interest in one of the topics, or out of boredom or to avoid going to other workshops they like less.

Another thing that surprised me at first was their behavior in class, because they were usually respectful and attentive, even if they knew very little about the topic. And if the topic raised touched on their own experiences, their interest increased exponentially.

Even though the inmates are more or less marked by their crimes, most of them have kept alive the embers of their lost innocence and long to return to their family life. And most of them show a real gratitude towards the institution and the volunteers there. For many, the class is a return to the innocence of childhood and their parents’ affection. And many of them retain a “sixth sense” of the innocence of a world where good ultimately triumphs over evil. As one inmate told me, “doing what is right may be difficult, but it makes you happy in the end.”