“Being a mother in my country requires a lot of sacrifice," said Dr. Celine Tendobi, gynecologist at Monkole Hospital in Kinshasa, during a recent conference held at the University of Navarra. 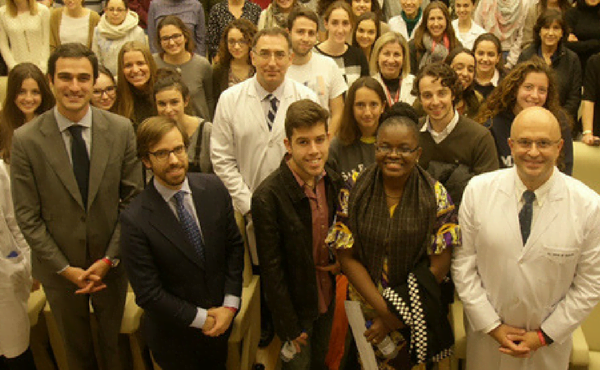 Celine Tendobi is the second from the right, in the front row.

“Being a mother in my country requires a lot of sacrifice, owing to the lack of medical infrastructure and the unhealthy living conditions that lead to infections, among other problems.” These words of Dr. Celine Tendobi, gynecologist at Monkole Hospital in the Congo, were spoken in a conference entitled “S.O.S. — Giving Birth in Congo,” organized by the department of Gynecology and Obstetrics at the University of Navarra, in Spain.

Dr. Tendobi also spoke about the challenging reality that “in the Congo each year 24,000 people die of AIDS and 78,000 of malaria.”

Also taking part in the conference was Alvaro Perlado, assistant director of Monkole Hospital. “We take care of many impoverished pregnant women, providing them with medical care before and after giving birth,” he said. This assistance is made possible by the Forfait-Mamá program, “which enables women from Kinshasa without financial resources to have access to good quality medical care, amid an environment of extreme poverty.” Up to the present, Monkole has cared for 82,000 patients and employs 200 people.

Of the over 80 million people living in the Democratic Republic of Congo, 60 million live amid conditions of extreme poverty, above all in urban areas such as Kinshasa. Each year, the sad reality is that over 30,000 women die giving birth and 20,000 babies die at birth or soon afterwards.

Monkole Hospital, opened in the Congolese capital in 1991, offers health care and hospital services in one of Kinshasa’s poor outlying districts. It also provides education and information on combatting HIV/AIDS, tuberculosis and malaria. Begun under the impetus of Blessed Alvaro del Portillo, it is a corporate work of Opus Dei.

The pediatrics department in Monkole provides health care for many impoverished young children. The hospital also has three ambulatory clinics that provide care for mothers and children living in rural area.

Dr. Tendobi said that “there are other hospitals in Kinshasha, but they are all private and very expensive.” The hospital she works at is not for profit, and its mission is much more ambitious. “We want to help the family continue being Africa’s great treasure. Here large families are the norm, with 10 or 11 children, despite all the poverty. And the elderly are the most esteemed members of the family. We can’t allow something so beautiful as this to be put at risk.”

"The family is Africa's greatest treasure"