In his 19 August general audience, Pope Francis continued his catechesis on the Church's social teaching. 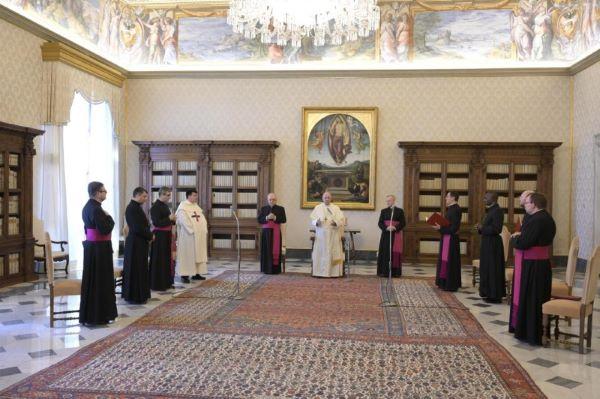 The pandemic has exposed the plight of the poor and the great inequality that reigns in the world. And the virus, while it does not distinguish between people, has found, in its devastating path, great inequalities and discrimination. And it has exacerbated them!

The response to the pandemic is therefore dual. On the one hand, it is essential to find a cure for this small but terrible virus, which has brought the whole world to its knees. On the other, we must also cure a larger virus, that of social injustice, inequality of opportunity, marginalisation, and the lack of protection for the weakest. In this dual response for healing there is a choice that, according to the Gospel, cannot be lacking: the preferential option for the poor (see Apostolic Exhortation Evangelii gaudium [EG], 195). And this is not a political option; nor is it an ideological option, a party option… no. The preferential option for the poor is at the centre of the Gospel. And the first to do this was Jesus; we heard this in the reading from the Letter to the Corinthians which was read at the beginning. Since He was rich, He made Himself poor to enrich us. He made Himself one of us and for this reason, at the centre of the Gospel, there is this option, at the centre of Jesus’ proclamation.

Christ Himself, Who is God, despoiled Himself, making Himself similar to men; and he chose not a life of privilege, but he chose the condition of a servant (cf. Phil 2:6-7). He annihilated Himself by making Himself a servant. He was born into a humble family and worked as a craftsman. At the beginning of His preaching, He announced that in the Kingdom of God the poor are blessed (cf. Mt 5:3; Lk 6:20; EG, 197). He stood among the sick, the poor, the excluded, showing them God's merciful love (cf. Catechism of the Catholic Church, 2444). And many times He was judged an impure man because He went to the sick, to lepers… and this made people impure, according to the law of the age. And He took risks to be near to the poor.

Therefore, Jesus’ followers recognise themselves by their closeness to the poor, the little ones, the sick and the imprisoned, the excluded and the forgotten, those without food and clothing (cf. Mt 25:31-36; CCC, 2443). We can read that famous protocol by which we will all be judged, we will all be judged. It is Matthew, chapter 25. This is a key criterion of Christian authenticity (cf. Gal 2:10; EG, 195). Some mistakenly think that this preferential love for the poor is a task for the few, but in reality it is the mission of the Church as a whole, as Saint John Paul II said. (cf. St. John Paul II, Sollicitudo rei socialis, 42). “Each individual Christian and every community is called to be an instrument of God for the liberation and promotion of the poor society” (EG, 187).

Faith, hope and love necessarily push us towards this preference for those most in need, [1] which goes beyond necessary assistance (cf. EG, 198). Indeed it implies walking together, letting ourselves be evangelised by them, who know the suffering Christ well, letting ourselves be “infected” by their experience of salvation, by their wisdom and by their creativity (see ibid). Sharing with the poor means mutual enrichment. And, if there are unhealthy social structures that prevent them from dreaming of the future, we must work together to heal them, to change them (see ibid, 195). And we are led to this by the love of Christ, Who loved us to the extreme (see Jn 13:1), and reaches the boundaries, the margins, the existential frontiers. Bringing the peripheries to the centre means focusing our life on Christ, Who “made Himself poor” for us, to enrich us “by His poverty” (2 Cor 8:9),[2] as we have heard.

We are all worried about the social consequences of the pandemic. All of us. Many people want to return to normality and resume economic activities. Certainly, but this “normality” should not include social injustices and the degradation of the environment. The pandemic is a crisis, and we do not emerge from a crisis the same as before: either we come out of it better, or we come out of it worse. We must come out of it better, to counter social injustice and environmental damage. Today we have an opportunity to build something different. For example, we can nurture an economy of the integral development of the poor, and not of providing assistance. By this I do not wish to condemn assistance: aid is important. I am thinking of the voluntary sector, which is one of the best structures of the Italian Church. Yes, aid does this, but we must go beyond this, to resolve the problems that lead us to provide aid. An economy that does not resort to remedies that in fact poison society, such as profits not linked to the creation of dignified jobs (see EG, 204). This type of profit is dissociated from the real economy, that which should bring benefits to the common people (see Encyclical Laudato si’ [LS], 109), and in addition is at times indifferent to the damage inflicted to our common home. The preferential option for the poor, this ethical-social need that comes from God’s love (cf. LS, 158), inspires us to conceive of and design an economy where people, and especially the poorest, are at the centre. And it also encourages us to plan the treatment of viruses by prioritising those who are most in need. It would be sad if, for the vaccine for Covid-19, priority were to be given to the richest! It would be sad if this vaccine were to become the property of this nation or another, rather than universal and for all. And what a scandal it would be if all the economic assistance we are observing - most of it with public money - were to focus on rescuing those industries that do not contribute to the inclusion of the excluded, the promotion of the least, the common good or the care of creation (ibid.). There are criteria for choosing which industries should be helped: those which contribute to the inclusion of the excluded, to the promotion of the last, to the common good and the care of creation. Four criteria.

If the virus were to intensify again in a world that is unjust to the poor and vulnerable, then we must change this world. Following the example of Jesus, the doctor of integral divine love, that is, of physical, social and spiritual healing (cf. Jn 5:6-9) - like the healing worked by Jesus - we must act now, to heal the epidemics caused by small, invisible viruses, and to heal those caused by the great and visible social injustices. I propose that this be done by starting from the love of God, placing the peripheries at the centre and the last in first place. Do not forget that protocol by which we will be judged, Matthew, chapter 25. Let us put it into practice in this recovery from the epidemic. And starting from this tangible love - as the Gospel says, there - anchored in hope and founded in faith, a healthier world will be possible. Otherwise, we will come out of the crisis worse. May the Lord help us, and give us the strength to come out of it better, responding to the needs of today’s world. Thank you.

[1] See Congregation for the Doctrine of the Faith, Instruction on some aspects of “Liberation Theology”, (1984), 5.

[2] Benedict XVI, Address at the Inaugural Session of the Fifth General Conference of the Bishops of Latin America and the Caribbean (13 May 2007).