This morning, the prelate of Opus Dei met with faithful of the prelature in Rome. It was the anniversary of the ordination of the prelature's first three priests, and also an occasion to celebrate Saint Josemaria's feast day. 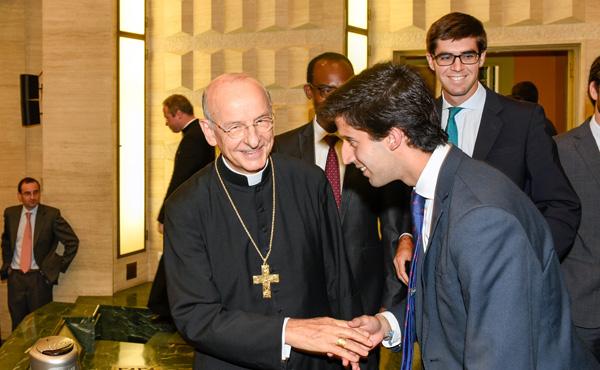 Monsignor Fernando Ocáriz met with faithful of the prelature in Rome on Sunday morning. It was the anniversary of the ordination of the first three priests of Opus Dei - Blessed Alvaro del Portillo, Fr. José María Hernández Garnica and Fr. José Luis Múzquiz - who were ordained to the priesthood on June 25th, 1944.

The prelate used the occasion to ask for prayers so that the prelature of Opus Dei and the whole world would never lack priests. He also emphasized that it was a day "to give some thought to the priestly soul of all Christians which is the foundation of their apostolic zeal."

Referring to Saint Josemaria, he said that we should be mediators in Jesus Christ so as to bring all things to God and so that the grace of God might vivify everything. This we can do through our work and prayer. The prelate highlighted the importance of the centrality of Jesus Christ in this regard: "When things become difficult for us, think about being faithful not just to an ideal but to Jesus Christ." Our faithfulness, he said, "is always faithfulness to Jesus Christ."

Monsignor Fernando Ocáriz also spoke about Saint Josemaria's feast day, celebrated on June 26th: "As Don Javier [Mons. Javier Echevarría, former prelate of Opus Dei], used to say, let's not look at his life as a thing of the past but as a living example for each one of us in the present." He also encouraged those at the get-together to have recourse to the intercession of Opus Dei's founder, and to continually deepen their knowledge of his writings.

The prelate ended the encounter by wishing everyone a good summer and asking for prayers for the pastoral trip he will be making throughout Europe. He also encouraged the faithful of Opus Dei in Rome to accompany Pope Francis with their prayer during the summer months, praying for him and for his intentions.