Brave, Passionate, and Full of Faith

Inma Alva, a historian investigating Opus Dei's beginnings, talks about the first women members: “What stands out is their capacity for great undertakings, their passion, and their enormous faith in the face of difficulties.”​ 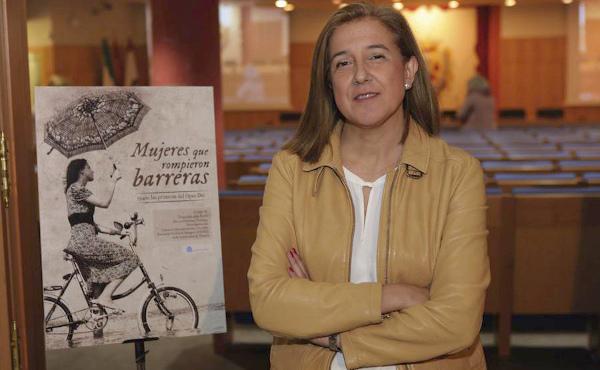 Inma Alva at an event entitled "Women who broke down barriers."

A historian and theologian, Inma Alva does research at the Josemaria Escriva de Balaguer Documentation and Studies Center at the University of Navarra in Pamplona, Spain. Part of her research focuses on the beginning of Opus Dei among women: the first ones who joined, the apostolic initiatives they set in motion, and how they spread Opus Dei to new countries. On the occasion of the 90th anniversary of the women's section, we traveled back in time with Inma to meet some of the women who formed a part of “the history of God's mercy,” as Saint Josemaria used to describe Opus Dei's beginnings.

Although Saint Josemaria "saw" Opus Dei on 2 October 1928, he did not originally think that his mission was going to involve women. Why was that?

We can't exactly know for sure, but at the beginning, St. Josemaria only worked with men: he was all alone and he was a young priest – just twenty-six years old – so it's understandable also in human terms. But while celebrating Mass on 14 February 1930, during the moment of Communion, St. Josemaria said he received a light from God through which he understood with certainty that women would also need to be a part of his mission. As St. Josemaria would later state, "Opus Dei would have been left 'crippled' without women, with only one arm." I think what he meant is that many essential human realities would have been left out of Opus Dei's mission, which is to seek holiness in ordinary life.

What did Saint Josemaria do next?

From that moment on, St. Josemaria got to work, mainly by sharing the message of Opus Dei with women who were already seeking his guidance in spiritual direction, including young professionals. At this point, the historical circumstances were not all that favorable, because at that time very few women in Spain were attending universities or exercising professions. On top of that, the outbreak of the Spanish Civil War made it nearly impossible to offer regular spiritual formation to any of the women he knew. This might explain why none of the women in touch with St. Josemaria in those early years followed through with Opus Dei, although many were grateful for the advice he gave them, according to testimonies offered years later. That's why St. Josemaria used to joke that the women's branch of Opus Dei finally came about "on the second or third try."

What were the first women of Opus Dei like?

The lives of the first women to carry out Opus Dei were extraordinary, especially when you take into account the things that were going on historically at the time they decided to join. It was the 1940s, the Civil War had just finished, and women had very little power in Spanish society. Among these pioneers, one who stands out is Nisa González Guzmán, a woman from Leon who requested admission to Opus Dei in 1941 when she was 33 years old. She ended up starting Opus Dei in the United States and Canada. Another person to mention here is Encarnita Ortega, a very optimistic and enthusiastic young woman who inspired a lot of trust in St. Josemaria. Enrica Botella, the sister of one of the first men in Opus Dei, also was part of this first group of vocations.

These women came from different parts of Spain, and many of them met St. Josemaria through the spiritual retreats he was preaching. Things generally spread by word of mouth, through friends, relatives, and other contacts.


But who was actually the first woman to join Opus Dei?

Lola Fisac is regarded as the first woman to join. She asked to be admitted in 1937, when the Civil War was at its peak, under extraordinary circumstances. Lola "met" St. Josemaria in a very unusual way, through the letters he was sending to her brother.

In one of these letters, as St. Josemaria knows Lola is reading them, he asks her – in coded terms, as mail was being intercepted and inspected during the war – if she would like to be part of his "supernatural family" as well. Lola answers in the affirmative and immediately starts to live her life according to the spirit of Opus Dei, as she is able to understand it at the time. Once the war is over, St. Josemaria finally meets Lola, confirms that her intentions remain the same, and explains in better detail what the vocation to Opus Dei entails.

So Lola is the first numerary of the women's section, although her personal circumstances do not allow her to actually live in an Opus Dei center until many years later, in 1965. Until that point, Lola takes care of her elderly parents and, at the same time, attends to the household administration of one of the women's centers, all the while living with her parents. When Nisa González Guzmán moves to Bilbao to set up the first center there, St. Josemaria designates Lola as the director of the center in Madrid, even though Lola it still taking care of her parents. This suggests that St. Josemaria felt he could count on Lola to be a support for the others.

Speaking of centers, when did the first women's center of Opus Dei open up?

The first center for women opens on Jorge Manrique Street in Madrid in 1942, and they begin by offering activities of Christian formation for university students. From 1944 onward, a steady stream of vocations arrives, and these women are introduced to Opus Dei thanks to the spiritual retreats that St. Josemaria preaches in Jorge Manrique. Some of those who join Opus Dei from that date onward include: Guadalupe Ortiz de Landázuri, Victoria López-Amo, Marichu Arellano, Sabina Alandes, Josefina de Miguel, Enrica Botella, Mari Tere Echeverría and Carmen Gutiérrez Ríos.

The promptness with which these women decide to respond to the vocation to Opus Dei is striking and worthy of attention. It's true that many of these women had already developed a spiritual life before meeting St. Josemaria, and most were receiving spiritual direction, perhaps in their parishes. Many of them had desires to do something for others and to serve them. What many of them also share is that, prior to meeting Opus Dei, they already felt that God was calling them to something greater, but not necessarily to religious life. Hence you could say that the vocation St. Josemaria presented to them was exactly what they were looking for.

When did the women start Opus Dei in other countries?

These women I mentioned earlier are some of the ones who take up the expansion of Opus Dei from Spain to the rest of the world. This small group, which in 1942 did not even number ten people, grew to about 80 to 90 women by around 1947. During this period, they were also making trips to different cities in Spain, opening centers in Bilbao, Valencia, Valladolid, Zaragoza, Barcelona, Granada, Cordoba, Santiago de Compostela... Keep in mind that the means of transportation at that time were not the same as they are today, and it was a lot more burdensome to travel. In some of these cities, there were already women who had seen their vocation to Opus Dei and would go on to become the first supernumeraries. In 1946, some of these women also moved to Rome.

In 1950, a group of these early women head to America to try to start Opus Dei there. Nisa and several oher women go to the United States, which was not just a geographical leap but also a great cultural leap as well. At the same time, Guadalupe and four others go to Mexico. There are actually a lot of letters being written between these two teams as they make their first inroads in two huge countries.

In the following years, Opus Dei began in several more countries in Europe. What stands out in all these women is their capacity for great undertakings, their passion, and their enormous faith in the face of all kinds of difficulties.