"We have to reach out to all peripheries"

On July 7, the last day of his stay in Portugal, the Prelate conversed with two large groups of people from the Prelature, in the auditorium of the Cupertino de Miranda Foundation, located in Porto. 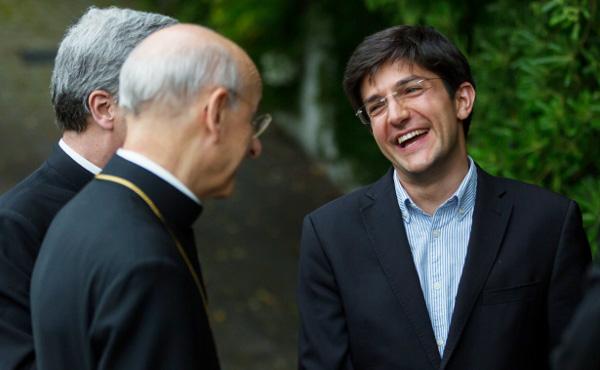 Pastoral visit of the prelate of Opus Dei to Portugal


In front of several hundred people, Monsignor Fernando Ocáriz reminded them of the need to put Jesus Christ at the center of our Christian life and at the core of our evangelising efforts.

In all situations of life, "may our reactions be those of Christ Jesus." How can we achieve this? "With prayer and the Eucharist, because in the Eucharist we become what we receive." In the Mass, at every Mass, "the redemption of the world is accomplished."

One of the persons there asked Monsignor Ocáriz how to ensure that the inevitable disagreements that arise in carrying out apostolic social projects do not affect unity and cohesion among people. The Prelate stressed that unity is a great good; it is a sign of life and should be asked for, since it is a gift from God. In addition, he gave some advice from Saint Josemaría: "It is better to reach an acceptable solution than to commit a fault against charity." Or as a popular expression says, "The best is the enemy of the good." In situations where charity is at risk, he concluded, it is best to give in.

Isabel, who is a hundred years old, told the Prelate she was born in the year of the apparitions at Fatima and now only wants to thank God for her family: her children, grandchildren, great-grandchildren and a great-great-grandson.

A nurse asked Monsignor Ocáriz how to carry out our work with a Christian spirit. "May the sick see you always happy," he said, "bearing witness with your joy. Then you will be able to tell them about Christ, who is the cause of your joy." Uisng words of the Pope, he advised her to "see in the sick the 'suffering flesh' of Christ."

There is material poverty and spiritual poverty, which manifests itself in loneliness and ignorance

Gisela has several children with chronic illnesses and has started an association for families in similar situations. The Prelate advised her to look at these children as God's favorite children and to thank the Lord for having them by her side.

Another question focused on the invitation of Pope Francis to reach the peripheries of the world. Monsignor Ocáriz pointed out that there are material peripheries, those of poverty, and spiritual peripheries: loneliness, sometimes within one's family, and ignorance. "We have to reach out to all of them," he said. He recalled that the Holy Father encouraged him, and through him all the faithful of the Work, "to look after the vast periphery of the middle classes, who have just enough to live, and who are sometimes so far from God," without forgetting the material peripheries.

In these afternoon meetings, as in all those he has held in Portugal, he recalled the Pope's request to pray for his person and intentions.


On the third day of his stay in Portugal, the Prelate spoke with Bishop António Francisco dos Santos, bishop of Porto, and with some families of Opus Dei members.

In the afternoon, the Prelate met with some members of the Work; they gave him a tennis racket, a sport he plays, decorated with Portuguese symbols. Among them was one of the people who began the work of Opus Dei in Portugal, in 1951. Monsignor Ocáriz also received some families and encouraged them to give example of coherent Christian life. 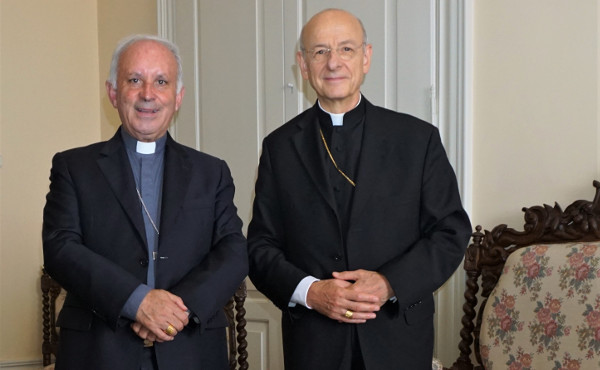 At the end of the day, he had several meetings with groups of young people in the sports hall at the Horizonte school, located in Gaia. The successor to Saint Josemaría spoke about the evangelising challenges set forth in the pastoral letter addressed to the faithful of Opus Dei last February.

He also met with a group of people who are promoting in Braga the construction of the new house for the Colina youth club.


"May we be eager to preach the word of God, which is always effective."

On Wednesday, July 5, at the Enxomil conference centre, Monsignor Fernando Ocáriz met for forty-five minutes with a group of priests from various dioceses, priests of the Prelature and seminarians.

He encouraged them to be "100% priests. May we be eager to preach the word of God, which is always effective. And may we have above all a great and growing focus, despite the fact that fatigue can sometimes come, on the Eucharist."

He also stressed the importance of fraternity among priests. We must "truly love our brother priests. And as far as we can, help them and let ourselves be helped." 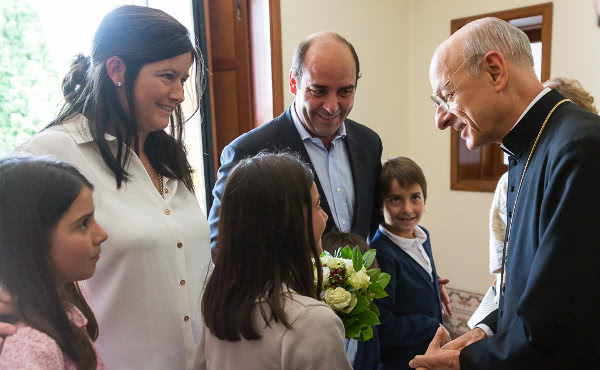 One of those present asked him how to preach well when we think that the audience is better than the preacher. The Prelate replied that a good practice is "to preach for oneself. Then when we preach we try to pray, and not just give an abstract, theoretical presentation, no matter how beautiful. What we are saying applies to me in the first place because I need it. When this is sincere, as it should be, then there is no need to have any concern about preaching."


Other topics discussed included the importance of unity among priests, and with the bishop of the diocese and the Pope; pastoral care of families; prayer as the most effective pastoral method; and the need to be aware of the love that God has for us, as an unshakable foundation of joy, even in the midst of great adversities.

Monsignor Fernando Ocáriz greeted some of those present, among whom was Tiago, a seminarian from Braga, who suffers from progressive blindness since childhood due to a congenital disease, and who is preparing for the priesthood with the help of new technologies and a guide dog. 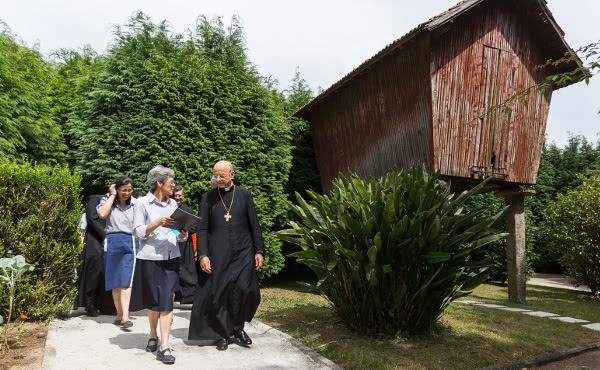 In the afternoon, the Prelate planted an oak tree in the garden of Enxomil conference centre and had two meetings with members of Opus Dei. In the first one, Paula, who regularly travels to the Azores Islands, offered him an image of Our Lady of Hope. Another person narrated some details about a volunteering activity that Portuguese university students will carry out next August in Cape Verde.

Monsignor Fernando Ocáriz also greeted three of the first women of the Work in Portugal: Judite, Guilhermina and Glória. He also spoke with Luís and María José, a couple that came with their children. The eldest daughter of Luís said that, for the centenary of the apparitions of Our Lady in Fatima, she is inviting her friends to offer to God one hundred rosaries, one hundred hours of study and one hundred hours of prayer in front of the tabernacle.

In the evening, at an Opus Dei centre in Porto, the Prelate gave a talk on the pastoral letter he wrote to the faithful of the Prelature in February. He underlined the urgency of getting to know Christ, which is the best way of getting to know God. He stressed that faithfulness to the Church and her teachings and to one's vocation is always faithfulness to Christ. That is why we need to "remember what Saint Paul said: for me, to live is Christ, it is to be Christ."

Before returning to Enxomil conference centre, he chatted with a group of high school students. One of them referred to the great fire that devastated central parts of Portugal two weeks ago, causing more than sixty deaths, and asked how to accept suffering. Monsignor Fernando Ocáriz began by distinguishing the suffering that depends on freedom from the one provoked by situations like a natural catastrophe, which does not depend on human freedom. "It is a mystery that we cannot fully understand," he said, but from the cross of Christ we can always draw some consolation. On the cross, it is God who wants to undergo suffering, and since then, in some way, suffering can be transformed into salvation, through love.

After his stay in Madrid, the Prelate of Opus Dei has traveled to Portugal to spend a few days with the faithful of the Work in that country. His first stop was the sanctuary of Fatima.


Last January, after the elective congress, Monsignor Fernando Ocariz expressed to the regional vicar of Portugal his desire to go to Fatima in the year of the centenary of the apparitions of the Virgin Mary to Saints Jacinta and Francisco and to Sister Lucia. 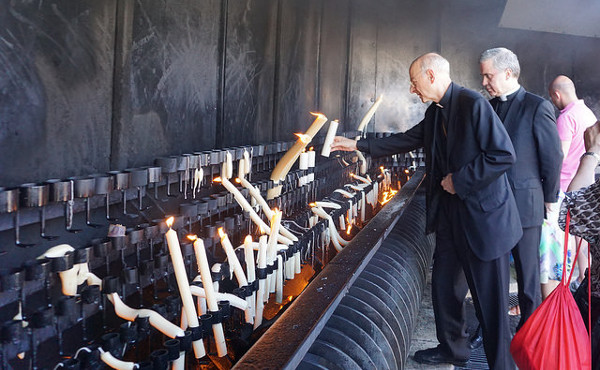 Yesterday, July 4, he arrived at the Marian shrine from Madrid at four o'clock in the afternoon, where the regional vicar of Opus Dei in Portugal, Father José Rafael Espirito Santo, was waiting for him. There he greeted Fernando and Rita, a Portuguese couple, and their children. A small group of priests from the Prelature and other faithful, including some sick, were also waiting for him.

In the Capelinha, he placed a bouquet of flowers at the feet of our Lady of Fatima and spent a half hour in prayer. 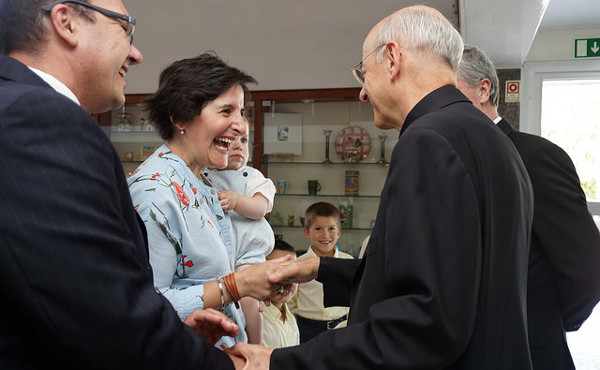 He also greeted some married couples, and chatted with a group of young students who are volunteering at a disability centre and nursing homes near the sanctuary.

In the evening, he arrived at Enxomil conference center, where he will stay for the next few days.