Skip to Main Content
About Opus DeiOpus Dei in the U.S.

Conference in Los Angeles on St. Josemaria and Ordinary Life

On Saturday February 2nd,  over four hundred and fifty people gathered in Long Beach, California for a one-day conference to honor the life and teachings of St. Josemaría Escrivá. Entitled “Passionately Loving the World,” the purpose of the conference was to celebrate the fifth anniversary of St. Josemaria’s canonization and the eightieth anniversary of Opus Dei’s founding.

The conference, which was open to the public, featured talks by several members of Opus Dei in the areas of Family and Culture, Media and Entertainment, Law and Medicine. Each half-hour talk was followed by a panel discussion with written questions being submitted from the audience. The panels included members and friends of Opus Dei who were experts in their respective subject areas.

Dr. Patrick Fagan, of Washington, D.C.’s Family Research Council, spoke on the need for couples to “fight for” their marriages when troubled times come and on the need for children to be instructed in the faith in a spirit of true freedom.

Linda Ruf told of her experiences with the media as she responded to major media inquiries during and after the release of The Da Vinci Code. She also offered some suggestions on how, in a media-saturated world, the message of Opus Dei might be better transmitted.

Attorney Martin Boles discussed how his practice as a partner in a major national law firm is influenced and guided by the example of St. Thomas More and offered suggestions on how lawyers might live up to the highest standards of professionalism and ethics while practicing at the highest levels of their profession. 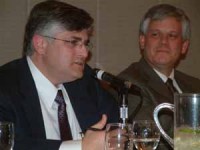 Dr. Aaron Kheriaty, a psychiatrist and faculty member at the University of California – Irvine Medical School, discussed how, in treating his patients, he applies the teachings of St. Josemaría, to treat them at both the natural and supernatural levels.

The day concluded with a talk by Fr. Paul Donlan who shared his memories of living with St. Josemaría.

“We invited everyone in the Archdiocese of Los Angeles and beyond,” said event coordinator Kraig St. Pierre, ”because we wanted them to hear and see for themselves the powerful message of Opus Dei coming from people who are trying to live that message in their everyday, ordinary lives. The conference exceeded our expectations in every way and is already bearing much fruit.”

Recordings of the conference are available by contacting St. Joseph Communications. Video of the event will also soon be available.