In his August 28 general audience, Pope Francis continued his catechesis on the Acts of the Apostles. "Christ is present in the sick in a special way." The sick are the "privileged people in the Church." 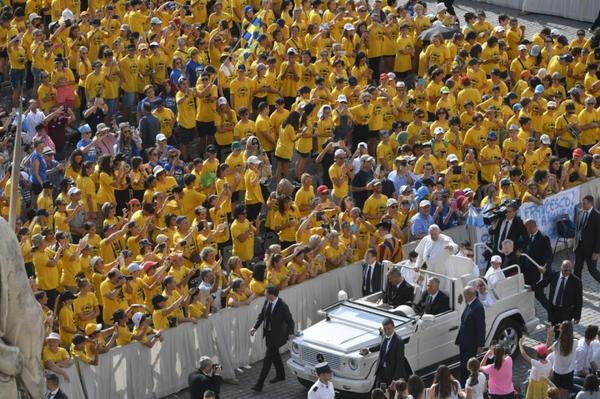 The ecclesial community described in the book of the Acts of the Apostles lives on the great wealth that the Lord makes available to it – the Lord is generous! – and experiences numerical growth and great vitality, despite external attacks. To show us this vitality, Luke in the Book of the Acts of the Apostles also indicates significant places, for example Solomon’s porch (cf. Acts 5: 12), a meeting point for believers. The porch (stoà) is an open tunnel that functions as a form of shelter, but also as a place of encounter and witness. Indeed, Luke emphasizes the signs and prodigies that accompany the word of the Apostles and the special care of the sick to which they devote themselves.

In chapter 5 of the Acts, the nascent Church shows herself to be a “field hospital” that receives the weakest people, that is, the sick. Their suffering attracts the Apostles, who possess neither silver nor gold (cf. Acts 3: 6) – so says Peter to the lame man – but are strong in Jesus’ name. In their eyes, as in the eyes of the Christians of all times, the sick are the privileged recipients of the joyful proclamation of the Kingdom; they are brethren in whom Christ is present in a special way, to allow Himself to be sought and found by all of us (cf. Mt 25: 36, 40). The sick are the privileged people for the Church, for a priestly heart, for all the faithful. They are not to be rejected: on the contrary they are to be healed, to be cared for: they are the object of Christian concern.

Peter approaches the beds and passes among the sick, just as Jesus had done, taking on Himself all the infirmities and diseases (cf. Mt 8: 17; Is 53: 4). And Peter, the fisherman from Galilee, passes by, but allows Another to manifest Himself: the living and working Christ! A witness is someone who makes Christ manifest, with his words or bodily presence, enabling him to be a prolongation of the Word made flesh in history.

Peter is the one who carries out the work of the Master (see Jn 14. 12): looking at him with faith, we see Christ Himself. Full of the Spirit of his Lord, Peter passes by and, without doing anything, his shadow becomes a “caress”, a healing, a communication of health, the effusion of the tenderness of the Risen One who stoops to the sick and restores life, salvation and dignity to them. Thus God manifests His closeness and makes the wounds of His children “the theological place of His tenderness” (Morning Meditation, Santa Marta, 14.12.2017). In the wounds of the sick, in the ailments that are obstacles to going ahead in life, there is always the presence of Jesus, the wound of Jesus. There is Jesus Who calls each one of us to care for them, to support them, to heal them.

The healing action of Peter arouses the hatred and envy of the Sadducees, who imprison the Apostles and, shocked by their mysterious liberation, forbid them from teaching. These people saw the miracles that the Apostles performed, not by magic, but in the name of Jesus; but they did not want to accept this and put them in prison and beat them. When they were miraculously freed, the heart of the Sadducees was so hardened that they did not want to believe what they saw. Peter then responds, offering a key to Christian life: “We must obey God rather than men” (Acts 5: 29). For the Sadducees said: “You must not continue with these things, you must not heal”. “I obey God before men”: this is the great Christian answer. This means listening to God without reserve, without delay, without calculations; following Him and being close to Him and those we meet on our path.

Let us too ask the Holy Spirit for the strength not to be afraid of those who command us to be silent, who slander us and even threaten our life. Let us ask Him to strengthen us inwardly, to be sure of the loving and consoling presence of the Lord by our side.