The prayer card of Saint Josemaria is now available in pdf format in 44 languages, including recent versions in Chinese, Vietnamese, Thai, Arabic, Bulgarian and Armenian.

Chinese is spoken by nearly 1.4 billion people worldwide. Now the prayer-card of St Josemaria is available in Chinese in traditional characters as well as in simplified ones. It is also now available in Thai , Vietnamese , Arabic , Bulgarian and Armenian , and other languages .

“When the Lord calls me and takes me to Heaven, from there I’ll be able to help you much more, and very effectively,” St Josemaria once said. From the day of his death, June 26, 1975, the headquarters of the Opus Dei prelature in Rome began to receive accounts of favors attributed to St Josemaria from all around the world: conversions, decisions to practise the Christian faith more fervently, cures, and material favors. They reflect a devotion that the Holy See called “a genuine manifestation of popular piety.”

It all began with a prayer 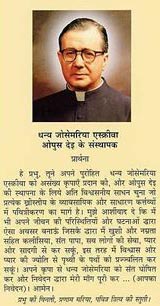 New versions on the web

The spreading of his message and devotion to him throughout the world, has made it necessary to produce versions of the prayer card in many languages. Now 6 new languages have been added, with a total of 44 available in pdf format.

The pdf format in which they are available on the St. Josemaria website means they can be more easily printed and passed on to others.