In September 1981, the eight young women about to begin Opus Dei's apostolic work with women in Ivory Coast met with Blessed Alvaro del Portillo in Rome. Three of them share memories of their first years and friendships in this West African country. 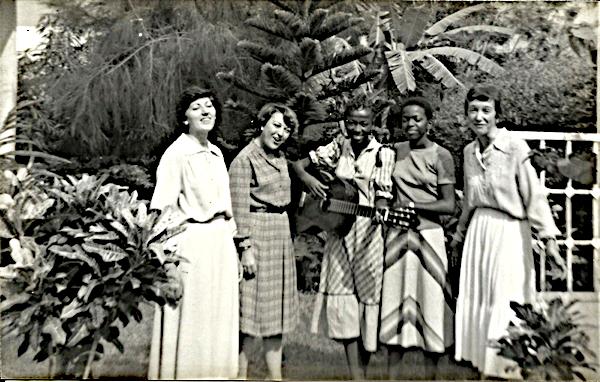 We met in Rome on September 18, 1981: eight “adventurers” going to begin the apostolic work of Opus Dei in the West African country of Ivory Coast. Some of us already knew each other, but most did not. There was Rose from Kenya, the youngest; Tonita from Portugal; Margot and Marie from France; Vivian who was from Venezuela but had lived for four years in Nigeria; and Charo, Maricarmen, and Rosario from Spain. On the 19th we began a series of unforgettable meetings with Tere Temes and Cuca, who had come from Kenya to share their experiences with us, and with Don Alvaro del Portillo, St. Josemaria’s first successor as head of Opus Dei. 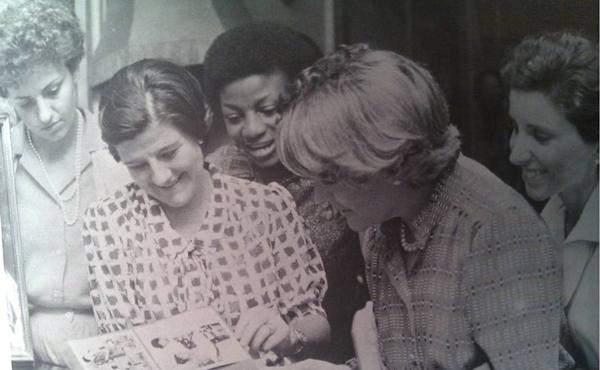 One of the stories we remember from our three meetings with Don Alvaro – undoubtedly the best part of that workshop – was what he told us about our new home. He had just received a letter from Father Sanchez, then Regional Vicar of Ivory Coast, in which he said that although the men had already found their final home, they had discovered that the house they were preparing for us was no longer feasible and they were going to leave us their house because it was in good condition. Don Alvaro told us, “As you can see, once again they are taking the lead in order to make your journey easier. This is how unity in the Work is lived.”

He told us as much as he could in those meetings so we would be well-prepared to begin the apostolic work. One day we asked him when he would come to see us. He said that when we told him that we had our Lord in our home, he would visit every night because he used to “visit” the Tabernacles of all the places where his daughters lived. And it was true: we always felt that the Father was close to us, including when he made a pastoral trip to our country eight years later, in October 1989.

The long-awaited day came on September 25. Five of us flew to our new country, while the other three returned to France to finalize their administrative documents. What a joy it was to walk on Ivorian soil! The airport was small then, and we walked from the stairs of the plane to the terminal. Two priests who had arrived a year before were waiting for us, together with a friend, a cooperator of Opus Dei who had a large car in which the five of us could fit. We drove past the church of Saint-Jacques des Deux-Plateaux, which he told us was our parish. This was where our first recollection with a few ladies took place four days later.

We started looking for work immediately. Those job searches were adventures through which we met many people. And many of them introduced us to their daughters, girls in primary and secondary school with whom we began a club that met each week for Christian formation. From the very beginning, we felt surrounded by generous hospitality.

We all had experience with clubs in our own countries, but before applying it to Ivory Coast we asked some mothers about their interest in the project and the kinds of activities they wanted for their daughters and for themselves. We took out a map of the country to inspire us in naming the club and finally chose “Marahoué,” one of the 31 regions of Ivory Coast. 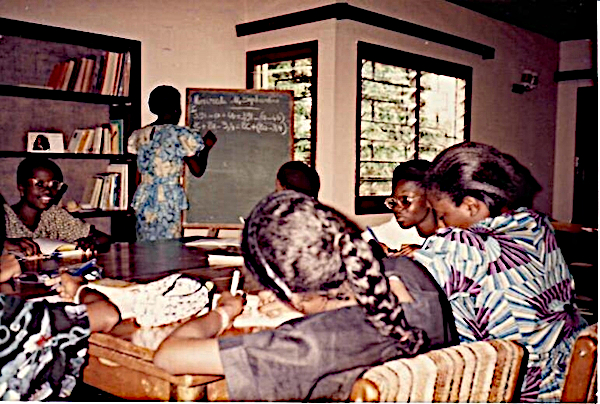 So we started on a Wednesday in November, with three girls in the second year of the Cours Moyen. Although our house at the time was not easily accessible, when we started hosting activities for all three levels of the club in July 1982, there were a few girls enrolled in each. Evelyne came because Marie-Angèle was her Spanish teacher at the Lycée Mamie Faitai, while her younger sister Marie-Claude knew Maricarmen from the Collège d’Orientation du Plateau. Augustine introduced us to her daughters, Alice and Marie-Ange, and another friend, also named Augustine, enrolled her young daughter Sonia… And so it went.

Our second house, in Cocody-Danga Nord, was more conveniently located, close to the university campus in a neighbourhood with many families. Little by little, the way to the Centre became familiar to the students and families, and we made many friends. Among those friends were Yvette, who invited us to eat our first dish of foutou under the amused eyes of her father, and Aurélienne and Marie, who braved the rain to attend a talk about Christian life in September on their way to a wedding.

In addition to morning and evening recollections, we dreamed of being able to offer spiritual retreats to our friends. A friend we met when we first arrived offered us a house in the Yopougon Andokoi region, and we were glad to learn that Father Joseph Muzquiz, one of the first three priests of Opus Dei, had stayed in a hotel nearby when he came to Ivory Coast to explain Opus Dei to the country's bishops. The Apostolic Nuncio, Achbishop Justo Mullor García, told us that when he went to meet Father Muzquiz, he found him walking around the neighbourhood and praying just in front of the house. The first retreats were held there in February 1983.

We were fortunate to have Archbishop Mullor García’s encouragement from the very beginning. He greeted us when we arrived in 1981 and came back to Abidjan in 1993. In 1981 there were just eight of us, and only one was African. He celebrated Mass in one of our Centres during his 1993 visit and told us in the homily that he was glad to see the oratory full of African women. In those first ten years, we had the great joy of seeing the activities develop and getting to know many more people seeking Christian formation. 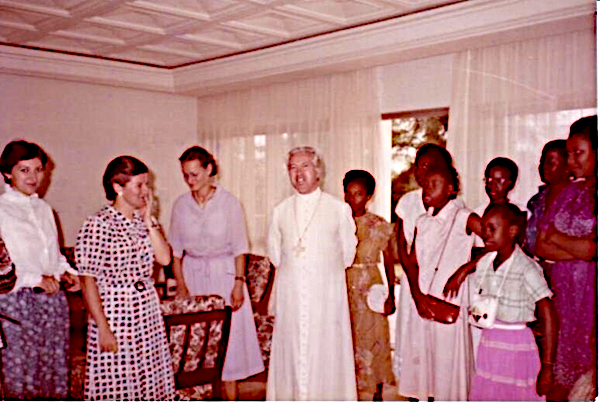 But let’s step back a little: in Rome, Don Alvaro had recommended that we find a new house quickly, so the Marahoué Club moved to another part of the city and the first centre was dedicated exclusively to activities for ladies. Since then, we have gotten to know hundreds of girls in the activities for students. Our goal, together with the girls’ parents, is to help each one flourish by growing in human and supernatural virtues.

Nasila, Wanjiku, Juliana, and Guetty were the first assistant numeraries to come to Ivory Coast. All four were from Kenya, the country in which Opus Dei’s apostolic work in Africa began, and their help was essential. Thanks to them, we were able to begin the Yarani Professional Training School in 1989. There they shared their expertise and helped some of the students discover their vocations to sanctify the work of the home. Marie, Michelle, and Vicky were the first of those students and went on to study further in order to dedicate themselves to this irreplaceable profession; to this day they are pillars of our activities, helping all the participants develop the qualities needed to be real leaders in home management.

With the Prelate of Opus Dei


That year, 1989, we were overjoyed to welcome Don Alvaro del Portillo to the Ivory Coast. We invited our friends, colleagues, and acquaintances to come listen and get to know him in a general meeting, which was cordial and fraternal despite the size of the Palais des Congrès of the Hotel Ivoire.

In that historic journey, Don Alvaro went to express gratitude to the village of M'Batto Bouaké, which had donated a plot of land for the construction of a new conference centre. During the traditional ceremony, he announced that the land would also be used to build a social centre. And indeed, in 2005 the Ministry of Health built an “Ilomba dispensary” where patients from many surrounding villages could be treated every week. There Pilar, a pediatrician, organizes activities for expectant mothers to receive personal follow-up, and other courses in literacy, sewing, cooking, baking, and preparation for professional exams are offered.

Reasons to Give Thanks

“Don’t think that Opus Dei has arrived in Ivory Coast: Opus Dei has just arrived in Abidjan,” people sometimes told us. And it is true that from the start we dreamed of going soon to other cities, starting with Yamoussoukro, the political and administrative capital, and Bouaké, the second-largest city in the country. In 1990 the dream became a reality when Dominique, a student, offered to host us and we started making weekend trips from Abidjan to Yamoussoukro.

But we had to find a more stable solution. Two women helped us search for a house and we bought one near the entrance to the city, easy to find though far from the central schools: it was a place to start. Those two became good friends of ours, so much so that one, Eliane, went to the beatification of Saint Josemarίa with five other ladies from the city, and the other, Elizabeth, went to the canonization. In the first women’s recollection in Yamoussoukro, an occasion of great joy, the fifteen attendees spilled into the hallways because they did not all fit into the tiny oratory. Not long after, we were able to open a new centre named Okassou, which means "on the hill" in Baoulé, the local language. 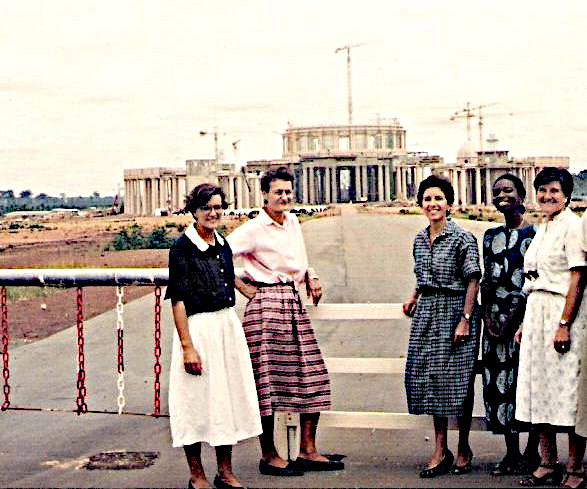 Years after Don Alvaro del Portillo, now Blessed, came to Ivory Coast, we had the joy of receiving Bishop Javier Echevarrίa, St. Josemarίa’s second successor, in both 1997 and 2011. In those visits, he showed his closeness to each of us and assured us of his prayer. The trips made a deep impression on the hearts of the Ivorians, who thanked him in the family gatherings he had with the faithful of Opus Dei and with all those who help spread the message of personal sanctification in ordinary life. Their thanks were an expression of gratitude to God for the mission entrusted to those called to exercise paternity in the family of Opus Dei: to our Founder, Saint Josemarίa, and his successors, including the current Prelate, Monsignor Fernando Ocáriz, who accompanied Bishop Javier Echevarrίa on those two visits.

In the years that have gone by since we arrived in Ivory Coast, we have only found reasons to give thanks to God: so many graces from God, new centres and activities, new women here who have decided to do the Work of God in this beautiful country, and always, the joy of seeing St. Josemarίa’s promise come true: “dream and your dreams will fall short.”