The Prelate in Nigeria: Making Christ the focal point of our lives

On day three of his visit to Nigeria, the Prelate of Opus Dei met many in gatherings at the Lagoon School Lekki, and at the Lagos Business School. 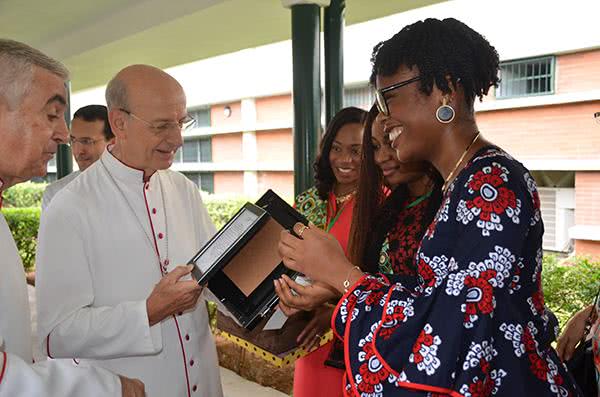 Msgr. Ocariz with some young professionals in Lekki

The large turnout of people were from Lagos, Ibadan, Iloti, Nsukka, Enugu, Benin and Abuja, all towns and cities extending from the West to the East and also Central Nigeria. Between the two main events of the day in Lagos, the Prelate was able to greet more than 1,000 people.

At the Lagoon School, Msgr. Ocariz, reflecting on the Gospel of the day, commented on the Pharisees’ disapproval of Jesus healing on the Sabbath day. He compared this to the oppositions, limitations and difficulties we experience daily. He encouraged the faithful to spread the Gospel and increase their confidence in God despite these limitations. 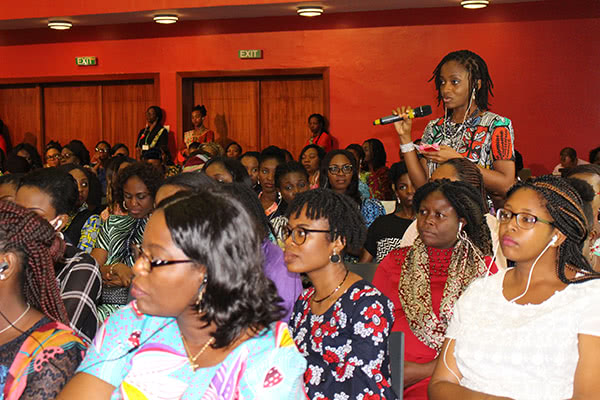 Recalling Pope Francis’ words about faith making us see as Christ does, the Prelate stressed the need for us to centre our lives on knowing Christ who is present in the Eucharist. He urged everyone to ask the Lord to help them see their lives as God does.He emphasized the need for fraternity shown in serving, understanding, forgiving and valuing others.

He went on to say that apostolate is not merely human but also supernatural: it is not so much about increasing the number of people as about helping them to know and love God better.

Responding to a question on the vocation of one’s children, he advised parents to trust in God. “Prayer, maturity and spiritual direction are crucial for discerning a vocation”, he said. 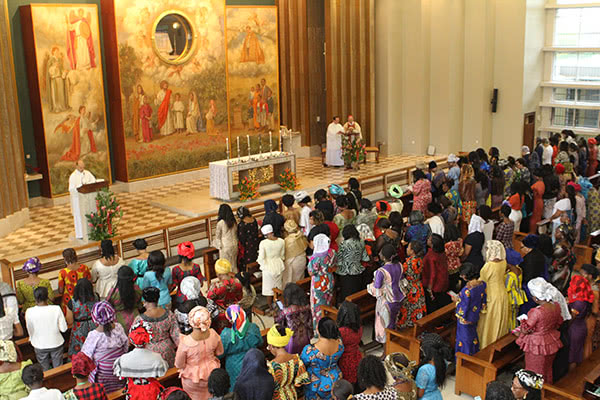 When asked how domestic work should be viewed, Msgr. Oscariz explained that Opus Dei teaches sanctification in ordinary life within and outside the home. The ambience, beauty and orderliness in the home facilitates affection and development. “It makes a lasting impression on people”, he said, adding that, “domestic work is the backbone of the family atmosphere in Opus Dei”.

On the question of emigrating from Nigeria due to economic difficulties, the Prelate pointed out that every country has its challenges. He said that although emigrating may not necessarily be the best option, it sometimes is. But he advised the audience to improve themselves professionally and work for the common good.

Speaking on the role of cooperators in Opus Dei, the Prelate said that cooperators support the Work with their prayers, time and financial contributions. He encouraged cooperators to work with the faithful of the Prelature to support Opus Dei as their personal circumstance and time permit.In the afternoon, Msgr. Ocariz went to the Lagos Business School (LBS), Lekki, Lagos to meet another set of people. He was received at LBS by the entire Management Board of the school led by the Dean, Dr. Enase Okonedo. He met briefly with them and several members of staff before proceeding to the meeting with the more than 400 young people who had come from different parts of the country. 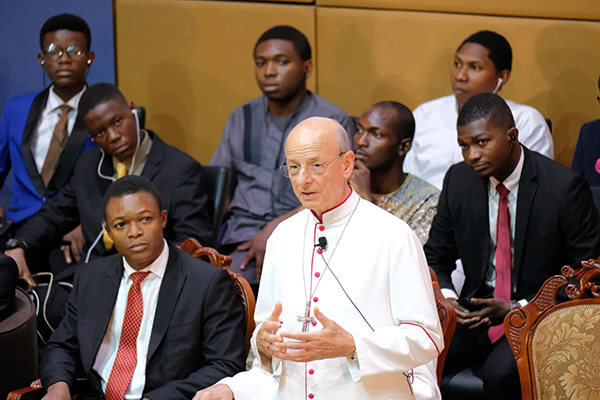 This latter meeting took place at the LBS auditorium. The Prelate encouraged them to be dedicated to the means of Christian formation, which help them get closer to God. “Christ is the focus and person you receive through the meditations, talks and other means of formation”, he said.

He also spoke about living virtuous lives amid a decline in morals and sexuality. “Don’t be surprised when you’re tempted; and when you fall, the solution is to rise and begin again”, he said.

Monsignor Ocariz ended his time at both gatherings asking all to pray for the Pope and the growth of Opus Dei in Nigeria.

The Prelate was later able to receive some families that wanted to greet him. Some came from far away cities like Benin. After listening to what they had to say, he gave them some advice, encouraging them in their zeal to be holy. At the end he gave his blessings, asking them at the same time to remember him in their prayers.